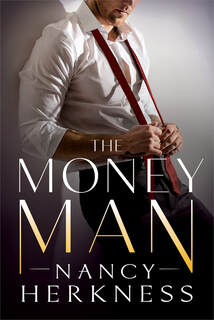 The Money Man kicks off the author’s newest contemporary suspense trilogy in the Consultants series.  The KRG Consultants group offers to help small businesses with difficulties free of charge.  Born of the intention of honoring their struggling roots.  Each of the three sexy owners will find unexpected mystery and love from woman looking for their aid.

The first book begins with Alice Thubrer.  A bookkeeper who is puzzled when her new accounting software seems to be making small errors.   Frustrated she can’t seem to figure out the solution, she stumbles on the KRG site and asks for help.  She is surprised when one of the owners, Derek Killion, personally takes over the investigation.

Derek is proud of his firm but is feeling restless.  When an unexpected problem arises from a small town bookkeeper, he think solving it will be a snap.  But he soon discovers that the numbers just don’t add up and feels impelled to meet the bookkeeper and figure out the solution.  But the solution isn’t straight forward, and Derek soon finds himself intrigued by the beautiful bookkeeper and the puzzle.  Both are undeniably irresistible challenges!  As Alice and Derek work to solve the dilemma they find more than they bargained.
Nancy Herkness has created amazing, real-life characters with hopes and dreams.  I liked that not only are Alice and Derek attracted to each other physically, but they are very compatible.   Both are good at their jobs and take pride in their work.   Their growing love is very genuine and not rushed like so many other romances where it is predominantly just chemistry.  Derek seems to be at a point in his life where he has accomplished his career goals but feels that there is something missing.  Brave, earnest and smart Alice seems to fit right in.   I enjoyed reading how Derek slowly begins to realize that his relationship with Alice is different from past relationships and that he loves her.  Alice for her part can’t believe a high powered and attractive man would find her as interesting as she finds him.  She is a bit dazzled by Derek but is strong enough to keep true to herself and even defends Derek!  While this book does have mystery, I liked how the author’s primary purpose was to highlight the growing love between the hero and heroine.   I can’t wait to read more in this fantastic new series!

This science fiction is the beginning of a new and exciting series. It features a main character who has uncanny good luck, a large dose of guilt and a huge sense of responsibility.

Fergus Ferguson is a hero known for his unique ability for finding things and getting out of sticky situations.  He is on his way to Cernee a planet on the edge of nowhere.  On his transport to the planet he meets plucky mushroom grower named Mother Vahn.  Their trip to the planet should be peaceful except someone wants Mother Vahn dead.  Fergus survives the attack but discovers himself saved by Mother Vahn’s suspicious relatives.  Fergus soon convinces them he had no part in her death but new information leads him to realize they have a common enemy.  For Fergus’s mission is to retrieve a stolen spaceship by the same crime boss that has been targeting Mother Vahn’s family.    This gang has steadily become more powerful and Fergus will need to find allies of his own.  As Fergus gets himself deeper into  the underbelly of Cernee he finds his own life in danger!  Finding the missing spaceship seems to be only the smallest of his many troubles.

This space journey features a compelling main character.  Fergus does not see himself as a hero and knows he is constantly running from his troubled history.  Although he downplays his past, we discover he might be a famous.  Many of the details are alluded to and make him all the more mysterious and interesting.  (As this will be a new series, it gives the author plenty of room to add new and fascinating characters/background in future books!)  Fergus is also highly intelligent, but he also seems to get out of the most difficult spots with a luck that is almost unbelievable.  Reading him use his wits to navigate a tricky political situation between five superpowers on Cernee makes this book a good mystery, too.  I also enjoyed the ‘flavor’ of space that the author gives without feeling that it was so technical or alien that I was getting confused.  This was a grand space adventure and one I hope to last for several installments. 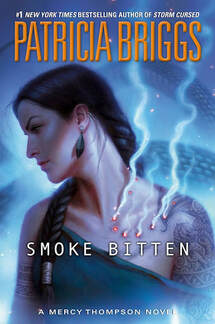 After the last threat to their pack.  The relationship between Mercy and her husband Adam has become slowly more tense.  Adam has distanced himself from her and their natural bond has weakened to almost nothing.  Mercy is frustrated and at a loss as how to fix this change.  For without a strong link between the alpha and his mate, their pack strength is also diminished.  Unfortunately, it appears that another pack is interested in taking over.  These invaders have started terrorizing their members.  And there is a mysterious predator loose which has an evil form of mind control.  And it is harming anyone in its path!  Can Mercy save her marriage and the pack?

This book has a good mystery, tricky Fae and lots of conflict within the pack.  Mercy is very busy.  I liked reading about the varying pack politics and the glimpses of Bran and Charles throughout the story.  (When will more of the Alpha and Omega series be in print!?)  Mercy and Adam are facing challenges that threaten their relationship and it was interesting to read their dynamics as in past books they have never had this type of rift.   For the first time Adam seems to have conflict within himself and I liked seeing the other side of his wolf.  I also liked the inclusion of Aidan, Adam’s daughter, and the mysterious new member of their pack, Sherwood.  Shrewood who is older and stronger than he appears.  In my opinion, he is currently the most interesting and fun character the author has introduced into this series and I hope she features him more!  As with the last two books, this book seems to be more in the vein of the normal day in the life pack challenges.  While the stakes are high for some reason the past few books do not seem to be as intense as her earlier works in the series.  Good, solid reads but I feel I’m missing that extra jolt.  Still Patricia Briggs is a master story-teller and she will continue to be an automatic buy.  Her superb writing style never disappoints!

The Queen’s Bargain is a must read for fans of the series.  It focuses on a new character named Jillian who is coming into her own and unique changes in the marriage between Surreal and Daemon.    This novel was an enjoyable read that clearly reminds readers why Anne Bishop is an award-winning writer of dark fantasy.
Jillian is an orphan working for the Warlord Prince of Ebon Rih.  As her body changes, she has noticed herself becoming interested in men.  But at this fragile transition she is vulnerable, especially to men who might take advantage of her innocence.  When she meets a charming young male, Jillian can’t understand why those close to her warn her to be cautious.

Daemon and Surreal have known each other for a long, long time.  However, one night changes everything and the usually strong Surreal doesn’t know how to handle their marriage.  For Daemon seems to be darker and more powerful.   Will their relationship buckle under the strain or will distrust break the tight control Daemon has over his powers?

This reader has been greatly anticipated this latest book in this well-loved series.  Most of the main characters are back but because the author is revisiting their daily lives and turmoil.  There isn’t the death, destruction and high stakes of the original trilogy.  Daemon is undergoing changes that make his control of his powers tenuous and Surreal is having her own doubts.  Their story was not exactly resolved but makes sense.  I hope that the author revisits them more thoroughly in the future.  The other main storyline deals with a new character named Jillian who is dealing with first love.  Her story was deeper and more interesting as her love interest has a somewhat twisted past.  My favorite character is Lucivar, who is actually the voice of reason in this novel.  He and Marian have a solid marriage which is an example of what should happen -in stark contrast to the other characters.  I also enjoyed reading about their children and hope that the author might write about them in the future, too.  Readers will like that there are brief glimpses of a Queen thought lost and intriguing looks into the complex politics between witches and their use and/or abuse of their power.   Yes, this was an enjoyable read but the problem for me is that it seemed only a tiny taste.   This novel only made me want MORE of this world!  I really hope, Pray, BEG that Anne Bishop will again return to this spectacular world of dark and light again soon.