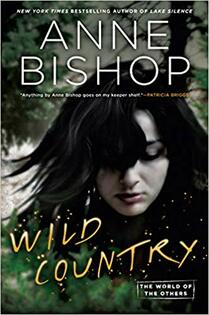 Anne Bishop is the New York Times bestselling-selling fantasy author of the Black Jewels series.   Her imagination knows no bounds and in recent years, she has created a new and edgy series called the Others.  The Others is a deep, dark and thought-provoking alternative world with elemental magic and savage shifters.  Where the human population is at the sufferance and mercy of beings with infinite power.  Although the first books in the series feature the main characters  Meg Corbyn and Simon Wolfgard.  The latest and upcoming books will showcase altogether different humans set in the same world with their own dire circumstance!

The latest novel, Wild Country, is scheduled to come out this March.  And I can’t wait to get my hands on it.   But first, I wanted to ask the author about her books and what new musings she has on the horizon.

1)      Wow!  This is such an honor and pleasure.  I feel I’m in the presence of greatness!  I’ve loved your books since the Black Jewels series.   Can you tell us a little about what inspired you to write fantasy?

Anne Bishop: The short answer is this is how my brain works. I’ve always loved stories about magic and magical beings, and I like writing stories that have the elements of fantasy. You can explore the range of human emotions and thoughts and, and you can still have fun doing magic—or meeting unicorns—or running with, or from, shapeshifting Wolves.


2)      I’m sure you get asked this all the time, but will you ever write another spin off in the Black Jewels world or have you ‘moved on?’

Anne Bishop: The Queen’s Bargain, the first of two new Black Jewels books, will be released in 2020. I don’t know if I would call it a spin off or a continuation since Lucivar and Daemon are back.

3)     Yeah!!    I think what really drew me to your works is how you prominently you feature women and their issues.  I love how you portray them as being powerful, even the ‘evil’ characters.   Have you had role models that you have used to create your characters?  What is something that all you feel all your lead female characters must have?

Anne Bishop: Role models? Maybe, although it’s usually blending aspects of a lot of different people in order to create a character.


4)      I’ve enjoyed reading the Other books that feature Meg and Simon.  Will you be returning to them?!  I feel that have so much more to tell.

Anne Bishop: I don’t know. That would depend on whether there is something going on in or around Lakeside that involve Meg and Simon.


5)       Meg is a blood prophet.  As such she suffers greatly for her visions.  How did you come up with the idea of the blood prophet and does this mean Meg will have a tragic end?!

Anne Bishop: The simple question I started with was what would happen to a girl if she saw a vision of the future every time she received a cut, intentionally or accidentally? How would that morph from a child needing to be very careful to girls becoming a commodity—and property.  I hope Meg doesn’t have a tragic end. She’s working on alternate ways to reveal the visions, and every time she doesn’t cut gives her a better chance of living a longer and richer life.


6)      That is a great relief!   Since your first Others book, I’ve been fascinated by glimpses of Meg’s Cassandra sangue friend, Jean.  I’ve always hoped this courageous woman would have her own book.  Will this happen or is she too ‘damaged?’

Anne Bishop: While it might be possible for Jean to have her own short story someday, my feeling is a story big enough to be a book would end up being a tragedy, and I wouldn’t want to put Jean, or myself, through that.  Remember, you might read a book in a few days or even hours, but I live with it and its emotional currents for a year.


7)     I get that.  I guess I was hoping she might be saved like Meg, too.   In Lake Silence, you departed a bit from the Others series and introduced a new female character named Vicki.  Vicki’s transformation was exhilarating to read.  Will we be reading more about her in future books, too?  Does Vicki have a wider role to play in the Others universe?

Anne Bishop:  Because the Lake Silence story is based on the template of a village mystery, I think Vicki and Aggie and their friends would know about the wider world of the Others, but their stories would be confined to their community. Will there be another Vicki and Aggie story? That will depend on whether they find another body, because that’s how village mysteries begin.


8)      Okay, your newest novel, Wild Country, will also feature a female lead (love it!).  Can you tell use more about Jana?  Will her role as a police woman play a larger part in your series?

Anne Bishop: Jana has just graduated from the police academy, with no possibility of finding a job in the human-controlled cities. When she’s offered the chance to be a deputy in Bennett, she accepts, but she doesn’t fully appreciate what she’s walking into. In the parlance of the Western genre, she’s the greenhorn from the East who has to learn a different way of life. As for what she might do beyond the current story, that’s something I’ll discover when there’s another Bennett story to tell.


9)      Great, so there might be another Bennett story....     The Elemental characters (especially the ponies) are fascinating.  Will you ever write a book from their point of view?  Or a novel about their genesis?  Which elemental power is your favorite and why?

Anne Bishop: I don’t know if I would write a whole book from the Elementals’ point of view, but their thoughts have appeared in chapters throughout the series. Favorite? Oh, I don’t play favorites.  Not with them.


10)      The Others has always seemed to me to be a large scale social commentary on how clueless and selfish human are destroying the environment as well as their shortsighted prejudices.  But in your books nature and the predators have the ability to fight back with a vengeance!  Is this something you have a deep feeling about?  Can you tell us how these issues may have shaped your writing?


Anne Bishop: Many years ago, I saw a Sierra Club bumper sticker that said One Earth, One Chance. That summed up the idea that we should be caretakers and not just takers. That feeling probably runs through a lot of my stories.


11)      Reading your novels always transports me into a fabulous world that I never want to leave!  Is it difficult for you to do world-building?’  Will there ever be graphic or illustrated versions of your stories?

Anne Bishop: The world-building isn’t difficult in itself, although choosing which aspects will be worked out in some detail and what will be part of the background wash that gives a world its distinct flavor can be challenging. I say it isn’t difficult, but a new world can take several years to develop as ideas are mixed together until the whole thing clicks and I have a feel for the place and the people who live there.


12)       Thank you so much for answering all my questions.  Since your first books, I’ve always wished I was a Jeweled witch!  If you could be one of the characters in your books who would be like to be and why?

Anne Bishop: I’ve been all of the characters and seen their strengths and flaws. I wouldn’t want to be one because that would mean giving up the rest.

For Additional Information You Can Check Anne Bishop out at: