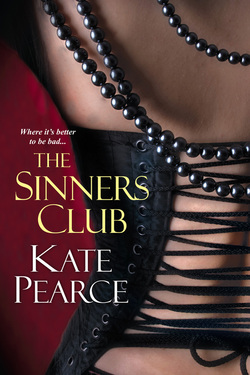 In addition, Kate Pearce has also begun writing another series under the pen name Catherine Lloyd about a female detective also set in the Regency era.  The heroine will be like a young Miss Marple that features a valiant war hero.  Sounds deliciously fun!

I can't wait to ask her about her two new series and how romance will play in her stories.

1)  Whew!  I am such a fan!  It is such a pleasure to have you on our site.  I amazed that you keep coming up with new stories.  What do you think is most rewarding about writing -what keeps you writing?

Thanks so much for having me! For me writing gets all those people out of my head. There’s a big long line of them talking to me and writing them down and giving them substance and meaning is a totally normal concept to me and one I’ll never change. That’s also why I keep writing. J

I just write like that. I have no idea why. Everyone who knows me in real life can’t quite believe what I write because I’m a quiet introverted ‘don’t touch me’ kind of girl. Even my husband looks at me funny sometimes. I started off just writing what I couldn’t find to read. I love my romances to be edgy, gritty and, quite frankly, filthy. When I started there weren’t many of those around. Then I found Elloras Cave in 2004 and that was the start of my career.

3) As books get steamier, do you think there is a line that author's shouldn't cross?  Or do you think a warning on the cover of the book is sufficient for potential readers?

I’m not into certain things, and wouldn’t write them but I don’t like anyone telling anyone that they can’t read the particular kink they want to as long as it’s legal. It’s taken women far too long to be allowed to be sexual beings for us to shame others for their reading choices. But I do believe a good warning upfront is important so that I, as a reader can make an educated choice.

4)  Speaking of steamy books, Your popular House of Pleasures books keep fans coming back for more.  What is the difference between this series and your new Sinner's Club series?  How many books do you have planned for this new series?

The Sinners Club is set in a similar world to the pleasure house, and there are many characters that flit between the two worlds. I’d probably say the Sinners is slightly less dark than the other series, but it is still kinky, sexy and good fun.

So far, I’ve written a novella, The First Sinners, out this month, to introduce the founders of the Sinners Club, which is a little bit of a gothic romance. Book one is The Sinners Club (Dec 2013) and gives us the charming and sexually amoral Jack Lennox who was in Simply Scandalous. Book two, which I’ve already finished, is going to be called Tempting the Sinner and has another character from Scandalous, Lord Benedict Keyes as the hero. Book three I haven’t quite decided what’s going to happen with that one yet. J Any more depends on how the first set sell!

5)  Jack Lennox is the hero in the first full length Sinner's Club Book.  Can you tell us more about Jack, what secrets does he have?

Oh Jack. He’s charming, funny, totally unscrupulous and willing to bed almost anyone with a pulse. Of course, when he encounters the Picoult brother and sister he is convinced they are tricksters and quite willing to be entertained. Its only when they turn the tables that we begin to see Jack as he really is, and watch him realize that he has to change and more importantly, fall in love.

6)  I have to ask, you have written several genres but always seem to return to Regency times.  Is it your favorite genre?  What keeps you coming back to your historicals?  Does it have to do with your 'English' roots?!

I studied history at college and did my dissertation about colonial Pennsylvania, so historical research is something I enjoy very much. I love getting to recreate the past. I think it makes it easier if you’ve grown up with it. For example I’ve been to Bath, to the Brighton Pavilion and I worked in London so those things are familiar to me and maybe easier to write about.

7)  I have always had a weakness for time travel books do you think you might write one where the heroine or hero travels from modern times to historical England?  Have you ever wanted to time travel to those times?!

I have one idea for something like that in my ideas folder. When I get the chance to write it, I’ll let you know. J And time travel would be my ultimate super power if I was offered the choice!

8)  I understand you have a new historical series also set in England but written under the alias Catherine Lloyd.  It sounds like a spirited and amusing detective series.  Will it also have a little romance? (Please!) What can you tell us about it?!

The Catherine Lloyd books are cozy historical mysteries in which my feisty heroine, Miss Lucy Harrington, daughter of the rector, and Major Robert Kurland a wounded bedridden hero from the battle of Waterloo are flung together to solve a crime in their small village. It’s sort of like Miss Marple meets Rear Window. There is a tiny romance subplot, but it will take a few books to develop. In the meantime Robert and Lucy are rather entertaining in their own right.

9)  Okay, Paranormal Romance, particularly Futuristic are my favorite genres.  I loved your Tudor Vampire Chronicles.  I couldn't help noticing that you have two new paranormal books!  Can you tell us about the Soul Justice series and your latest e-book Sci Fic book?

I love writing paranormal romance, but it never sells as well for me. L No idea why. The Soul Justice books from Carina, Press, Soul Sucker and Death Bringer are set in a contemporary world where the idea that there is another world full of Fae and trolls and things that go bump in the night is known and managed by the government. Ella Walsh is not your regular kick ass leather clad paranormal heroine. She’s a bit of a sarcastic slob. The hero, Vadim has so many secrets that it takes two books to uncover half of them. The books are lighter, funny, steamy but not erotic, and I really had a blast writing them.

10)  This has been such a pleasure, thank you so much for taking the time to be on our site :)

It was a pleasure to be here! Thank you for having me. J

For Additional Information about Kate Pearce  check her out at:

Unsure of his reception, Jack Lennox adopts the guise of his own secretary upon returning to his ancestral home to claim his father’s earldom. When he arrives, he’s stunned to discover the previous earl’s lovely young widow, a woman of beguiling curves and sensual smiles, warming the bed…

Note: This book is about Jack Lennox who you met first in Simply Scandalous.

Faith Pelly is tired of being the responsible daughter. She longs for adventure with a man who will introduce her to the secrets of carnal desire. But she never dreams she will meet the Savage Rake who flirts with her, seduces her and takes her as his own…

Soreya Lang has never met a male telepath before, let alone one who is willing to die for her on an interplanetary mission gone wrong. Risking everything, she acts on her instant telepathic and physical connection with Esca and encounters a level of psychic power she never knew existed.

Esca can’t believe he’s finally met the female who will complete his sexual and telepathic triad. He promises himself that if they survive, he’ll take her back home, introduce her to his enigmatic First Male, Ash and pray that biology will do the rest.

But nothing is ever that simple, and Soreya, Esca and Ash will have to find their own way through the ties of family and traditions to experience the full telepathic wonder of the power of three…

A powerful magic user is stealing people’s faces in San Francisco, and empath Ella Walsh and shifter Vadim Morosov have been called in to investigate. Still adjusting to the closeness and permanence of their new relationship, the government-paired mates are soon hot on the trail of an Otherworld cultist from Vadim’s past.

But their target turns the tables, and after he gives Ella someone else’s face, the couple will have to follow him to Otherworld to get hers back. There, in an ancient world of family ties, old grudges and monsters, where living memory stretches centuries, Ella will have to confront the dangerous truth of Vadim’s bygone life.

Because there’s a reason the Fae call him Death Bringer, and if Ella can’t unravel it, she may never see her mate—or her face—again.

Supernatural Branch of Law Enforcement empath Ella Walsh sucks memories from people’s heads. The job fills her mind with others’ nightmares and leaves her with little time for love, but if she doesn’t pair off with a mate of the government’s choosing soon, the psychic blowback will destroy her powers and her sanity.

The last time shapeshifting SBLE superstar Vadim Morosov worked with an empath, he got her killed and himself assigned to a desk. He worries about taking on another partner, but helping Ella track down an empath killer might be his only chance to save his career.

Naturally, the government decides to throw them together…

They resist at first, but they can’t deny the simmering heat between them. As the killer’s strikes grow closer to home, their bond gets tighter. And when the murderer finally traps Ella, her developing link with Vadim might be the only thing that can save her.

As a former spy, Violet LeNy has mastered the art of deception. But there is no disguising the heated passion that still burns between her and Richard, the man she once betrayed but who now is her only hope of survival. Soon she plans a scandalous game of seduction where sensual surrender is the ultimate pleasure…