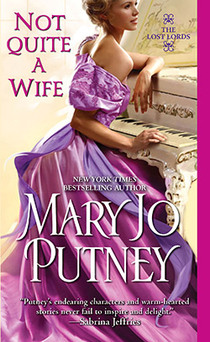 
Mary Jo Putney is the New York Times bestselling author with legions of loyal fans. (Myself included!) She has written numerous historical, contemporary and paranormal romances. But my favorite are her historical romances set in Regency England. This year, her sixth, Lost Lord book, Not Quite a Wife, is coming out. I couldn't wait to ask her about it plans for future books!

Here is what the illustrious author said.

1)  Your career is the envy of many writers. What do you think is the secret to your success?

Hmmm…..terrier tenacity? It helps to be adaptable because the business changes, and has been changing really fast these last few years! And a certain amount of luck is required; I've been fortunate never to be buried under one of those huge life issues that make writing impossible.

But I think the key is to have a passion for telling stories. That's what keeps me coming back to the computer on bad days as well as good ones. Writing is hard, but it's also profoundly satisfying.


2)  You do you feel your writing has changed over the years?

I'm not as wordy as I used to be! When I started, my style was very traditional Regency. I never met a compound sentence I didn't like. Over time, I've tried to sleek down my writing so it's more efficient and accessible. Some days I'm more successful than others.

But the kinds of stories and characters I like have remained the same. I still mix romance and adventure. I like my protagonists to be intelligent and honorable even when they're hurting. Many, especially the heroes, have suffered deep traumas, but through the course of the story, they become "stronger in the mended places." So I'd say that the core of my writing hasn't changed dramatically.


3)  I especially like how you tackle difficult issues in your romances. Have you had publishers ever shied away at some of your storylines or asked you to change them?

On the whole, I've been able to write pretty much what I want. My first editor, Hilary Ross at NAL, would let me get away with almost anything as long as the result was a strong romance. Often I didn't even know that what I was writing could be considered edgy until it came out and some readers hyperventilated. <G> But real people are complicated, and I want my stories to reflect that.


4)  I am a big fan of your historical romances. However, the women in those times we often restricted, unlike woman of today. Do you find it difficult to portray their strengths without being out of context too much?! Speaking of which, of all your heroines do you have a favorite and why?

The restrictions are part of the fun! There have always been strong, creative women, and a writer's challenge is shape characters who have strength and ability in ways that fit the time period.

A favorite heroine? Impossible to choose! But Cassie in No Longer a Gentleman would make the short list. She's a spy and a survivor, and doesn't expect to make it through the wars alive. Then she rescues Grey, who has been a prisoner in a French dungeon for ten years. She gives him understanding and passion, he gives her laughter and joy. They're a great couple. At least, I think so!


5)  I read in one of your interviews that you love the 'warrior poet' hero. Can you tell your fans more about this hero type? Do you have your very own?! Do you know where your fans can find one in real life?!

A warrior poet is strong and secure enough that he doesn't have to behave like an alpha-jerk! He may be suffering from past traumas, but he doesn't use them to justify bad behavior. He's protective of women and children, and usually in touch with his emotional and creative side. As for finding one in real life--well, you're on your own there!


6)  Can you tell us what inspired you to write your Lost Lords series and how they all connect?

I love series built around powerful male friendship. My Lost Lords started out as damaged boys who became family for each other and who aren't afraid to be loyal and supportive. Because they can be good friends, you just know that they can be great partners and husbands. The heroes in this series were all sent to school at the Westerfield Academy for boys of "good birth and bad behavior." The founder, Lady Agnes Westerfield, has great compassion and understanding for her square peg students, and she teaches them how to live in their world without losing their souls.


7)  What can you tell us about your sixth Lost Lord books? What makes the hero so special?

James, Lord Kirkland is a dark, enigmatic spymaster. His loyalty to his country and friends is bone deep, and he appears as a secondary character in all the earlier books. But he always seemed rather haunted, and there are hints of mysteries in his past. It isn't until the beginning of Not Quite a Wife that his great secret is revealed--and then the fun begins!


8)  You also have written an exciting YA historical fantasy books called the Dark Mirror series. Why a YA series? Was writing for a different audience more difficult/challenging?

I've always been fascinated by the parallels between Britain in the Napoleonic Wars and in World War II. During both wars, there were long periods when Britain stood alone against a Continental monster. In Dark Mirror and Dark Passage, my teen mages travel in time from the Regency to WWII and use their magic to help Britain, which was in dire straits. In the third book, Dark Destiny, the friends they've made in the twentieth century go back in time to help against Napoleon. Since friendships, action, and personal growth are so important, YA turned out to be a great way to tell these stories.

It's always a little scary to try a new genre, but I've been a YA reader for years, and ultimately, a good story is a good story. YA readers are so wonderful and enthusiastic when they find stories they enjoy.

9)  With the success of your Dark Mirror series, do you think you might write another adult themed fantasy/romance series again?!

I wouldn't be averse to that, but it's hard to find the time! I'm only writing one full length novel a year, along with a shorter work or two, but I've been releasing my backlist as e-books and now audiobooks, and it's hugely time consuming. I do love combining the history and the magic, though. We'll see.


10)  Can you please give us sneak peak about your future books?!

I'm currently working on Lost Lords #7, Not Always a Saint, which will be out in September 2015, I believe. The hero is the brother of Laurel, the heroine in Not Quite a Wife, and he's another graduate of the Westerfield Academy. But his life has gone in a different direction from earlier heroes, and that's why I found him interesting. A saintly man meets a wicked woman. Fun!

My current guess it that there will be two or three more Lost Lords books beyond this. But I won't swear to that!

Thank you so much for taking the time to answer all my questions!! Your books have often been my most enduring and well-loved companions. It has truly been an honor having you on our site. :)

Thanks so much for having me! I always love talking about my stories.


For Additional Information about Mary Jo Putney check her out at:

James, Lord Kirkland, owns a shipping fleet, half a London gaming house, and is a ruthlessly effective spymaster. He is seldom self-indulgent...except when it comes to the gentle, indomitable beauty who was once his wife. Laurel Herbert gave James her heart as an innocent young girl - until she saw him perform an act of shocking violence before her very eyes. That night she left her husband, and he let her go without a word of protest. Now, ten years later, a chance encounter turns passionate, with consequences that cannot be ignored. But as they try to rebuild what was broken, they must face common enemies and a very uncommon love.

Even the most proper young lady yearns for adventure. But when the very well bred Miss Sarah Clarke-Townsend impulsively takes the place of her pregnant twin, it puts her own life at risk. If the kidnappers after her sister discover they’ve abducted Sarah instead, she will surely pay with her life…

Rob Carmichael survived his disastrous family by turning his back on his heritage and becoming a formidable Bow Street Runner with a talent for rescuing damsels in distress. But Sarah is one damsel who is equal to whatever comes. Whether racing across Ireland with her roguish rescuer or throwing herself into his arms, she challenges Rob at every turn.

Kate Corsi always dreamed of working in her family's world-famous demolition business—a wish her old-fashioned father denied until his untimely death. He leaves a fortune to Kate and the business to her ex-husband, Donovan—but only if they agree to live under the same roof for a year.

Kate and Donovan married too young and stayed too long in a dangerously destructive marriage. Ten years later, surely they're mature enough to co-exist peacefully. But the embers of attraction swiftly flare into flame again.

Now, they must confront the pain of the past if they are to have a chance for a future and save their business from a saboteur they're beginning to suspect of murder.

Grey Sommers, Lord Wyndham, never met a predicament he couldn’t charm his way out of. Then a tryst with a government official’s wife during a bit of casual espionage in France condemns him a decade in a dungeon, leaving him a shadow of his former self. Yet his greatest challenge may be the enigmatic spy sent to free his body—the only woman who might heal his soul.

Half English and half French, Cassie Fox lost everything in the chaos of revolution, leaving only a determination to help destroy Napoleon’s empire through her perilous calling. Rescuing Grey is merely one more mission. She hadn’t counted on a man with the stark beauty of a ravaged angel, whose desperate courage and vulnerability touch her frozen heart as no one ever has. With Grey, she can become the passionate woman she has long denied. But a spy and a lord are divided by an impassable gulf even if they manage to survive one last, terrifying mission….

Known as “the despair of the Davenports,” Reginald Davenport lived a reckless, rakish life while waiting for his hated uncle to die and leave Reggie an earldom. Then the rightful heir claims the title and property and offers Reggie one last chance: Strickland, the estate where he was born and the site of his greatest joys and sorrows. Reggie returns to Strickland, resolving to build a healthier, more honorable life—if he can.

Young Alys Weston fled her home in despair, vowing never to trust another man. Over the years, she’s built a good life with a foster family and a position as steward of Strickland. She uses her skills to help her people, and her initials to convince the elderly earl who owned the state that she’s male.

Then the new owner appears in all his dangerous masculinity and threatens everything Alys holds dear. Good resolutions crumble when two passionate, complicated people are drawn together despite their best judgment. Can love lead to redemption and trust? Or is it too late?