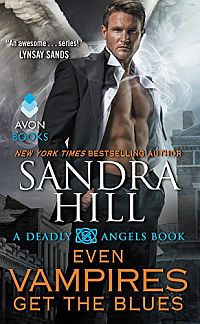 
New York Times bestselling author Sandra Hill's popular books are unique and utterly addictive. Her books can be counted on to tickle your funny bone and make you believe in the power of love.  She has also single-handledly brought Vikings men into sex symbol status.  In her newest series, the Deadly Angels, she has introduced her hot vampire angel heroes. This August, her latest book, Even Vampires Get the Blues, features her hunky hero, the vampire angel Harek Sigurdsson. I was hoping to ask her more about her latest book and how she started her Deadly Angels series.

1)  This is such a treat!  It is so hard to find a good romance with humor.  How did you find your writing style?  Why do you think no one can write quite like you?!

I never intended to write humor when I started writing novels. In fact, my family would say I don’t have a funny bone in my body. My first effort at fiction was a historical romance, but then I read a book by then new author Constance O’Day Flannery, a time travel in which a woman was in a dentist’s chair when an electrical storm broke out, and somehow she landed in the Old West where everyone thought she was a lunatic because of her swollen cheek (novocaine), drooling, and a paper necklace. I laughed out loud, and thought, I can do this! Thus was born THE RELUCTANT VIKING.

2)  I'm a glad you did!  I have to ask, your Deadly angels series are a huge hit!  How did you come up with the idea for this series?  How many books do you have planned for the series?

Years ago, when the vampire craze just hit the publishing scene, I mentioned to my editor that I should write a series about Viking vampires and she told me not to bother, that vampires were just a passing craze. Hah! I’m not really fond of vampire books myself, not the dark ones, but then I got hooked on the TRUE BLOOD/Sookie Stackhouse series. Vampires with a sense of humor! Because I a bit religious, I wanted my vampires to have some ties to God (or at least St. Michael), and, of course, they had to be Vikings. It was a natural progression. And, really, the common element in all my books is humor, whether they be Vikings, or vampires, or Navy SEALs or sexy Cajuns.

3)  What makes your latest book, Even Vampires Get the Blues so special?

Harek is one of my favorite of the Sigurdsson brothers. Extremely smart and business savvy. A Viking geek, you could say, who knows more about sex than, oh, let’s say Christian Gray. <g> I also like the fact that my heroine, a female Navy SEAL, is from New Orleans, one of my favorite places, and that she has a family history tied into Harek’s gravest sin. This book has more of a contemporary feel than a paranormal one, imo, because of Harek’s ability to adapt to modern times.

4) Can you tell us more about the hero, the vampire angel Harek Sigurdsson?

He’s always getting in trouble with St. Michael because he keeps making money, even when he doesn’t try that hard. A game of cards. A stock pick. Harek thinks he’s too smart to fall for that ridiculous notion of love as some of his brothers had (not after his bad experiences in the past). Boy, does he have another thing coming when he gets knocked for a loop, literally, by Camille Dumaine.

5)  Your heroes are always swoon worthy.  But why did you choose Vikings?  What about them just had to be written about?

At the time I first started writing novels, I was also working on a family history. To my amazement, I was able to trace my father’s lineage all the way back to Rollo (or Rolf the Gangr)…yes, the same character from the History Channels Viking series. With a little research, I learned that Vikings were a fascinating people…not necessarily the brutal raiders portrayed by some historians. They were known to be especially tall and good looking, plus they bathed more often than other men of that time period. They were brave seamen who had a remarkable sense of humor as evidenced by their sagas.

Yes, I am working on the LeDeux twins. Plus, I am planning a novella prequel to that, telling Tante Lulu’s story when she was a young woman. Tentative titles for those books are DON’T THINK TWICE! and WHEN LULU WAS HOT!

I’m considering it. My next book in the series involves Zebulon the Hebrew, a demon double agent for the vangels. I’ve been pondering Regina, the vangel witch, but haven’t decided for sure yet.

Yes. There are still stories to be told about the other Navy SEALs…Slick, Jam, Geek, etc. Plus there are Vikings in the past who need stories, too. Alrek the Clumsy Viking. Jamie the Scots Viking. Tykir’s other sons. And others.

9)  Is there any subject you haven't written, that you would like to write about?

Right now, there are two many books on my plate to handle. That doesn’t mean an idea won’t pop into my head, without warning. Perfect example is Tante Lulu. Despite fans urging me to go back and write her story, I resisted for years, but then recently I got a lightbulb moment about how to handle it.

Ohhh!  I can't wait!!  This interview has been one of the highlights on the website for me. Thank you so much for your gracious and generous time!

Thank you. As always, I wish you readers smiles in your reading.

For Additional Information Cher out Sanda Hill's website at:


Even Vampires Get the Blues- Aug 2015
New York Times bestselling author Sandra Hill delivers a sizzling new entry in her Deadly Angels series, as a Viking vangel’s otherworldly mission teams him with a Navy SEAL who’s more than his match— she’s his predestined mate . . .

The fact that vampire angel Harek Sigurdsson was a Norseman in his mortal life doesn’t make thawing out after exile in Siberia any easier. But things heat up when his search for evil Lucipires connects him with Camille Dumaine, a human who thrums with sensual energy that can mean only one thing: she’s the mate Harek’s been seeking for centuries . . .

The SEALs call her “Camo” for her ability to blend into a crowd—yet Harek’s intense blue gaze singles Camille out like a white-hot spotlight. The security wiz was hired to help bring down a ruthless band of international kidnappers, but Camille senses an unspoken agenda—besides Harek’s bold declaration that she’s his "destiny." Just Camille’s luck that the sexiest man she’s ever met may also be . . . a vampire!


Desperado - May 2015 Reprint
Major Helen Prescott always played by the rules. That’s why Rafe Santiago nicknamed her “Prissy” at the military academy years before. But it wasn’t just Rafe’s teasing that got under her skin. His irresistible good looks made Helen lose control on one unforgettable night. So when a stint in the National Guard brings Rafe under her command, she not only lays down the law with him, but swears to herself she’ll resist him. When a routine skydive goes horribly wrong, all bets are off as they find themselves parachuting back in time to the 1850 California Gold Rush.

Mistaken for a notorious bandit and his infamously sensuous mistress, Rafe and Helen are now on the wrong side of the law. As they try to stay one step ahead of the authorities, they surrender to temptation. But will their desire be strong enough to keep them together if they ever find their way back to the present . . . ?

It’s been centuries since the Norseman Sigurd Sigurdsson was turned into a Vangel—a Viking Vampire Angel—as punishment for his sin of envy, but he’s still getting the hang of having fangs that get in the way when seducing women. Slaying demon vampires known as Lucipires and using his healing gifts as a cancer research doctor, Sigurd is sent to Florida’s Grand Keys Island as a resident physician . . . where he encounters a sinfully beautiful woman.

The only hope Marisa Lopez has of curing her five-year-old daughter is a pricey experimental procedure. When she meets the good-looking doctor, Marisa is speechless. Then Sigurd tells her he believes he can help her daughter. Could this too-hot-to-resist Viking doctor be an angel of some sort sent to bring a miracle for her daughter? Or is he just a vampire bent on breaking Marisa’s heart?

For the first time ever the leader of the Viking Vampire Angels, Vikar Sigurdsson, has been talked into celebrating a traditional Christmas in the creepy castle in Transylvania. That would be Transylvania, Pennsylvania, not Romania. The tree has been decorated, gifts have been wrapped and stockings have been hung. And that’s mistletoe, not cobwebs. hanging from the ceiling…really!

The icing on the vampire cookie comes when vangel Karl Mortensen rescues Faith Larson, a battered young waitress, from her abusive boyfriend and hides her in the castle amidst the Christmas chaos. But what Karl thought was a frail young teenager is actually a very tempting woman. And she thinks his fangs are sexy!

But a strange “Christmas visitor” at the castle and demon vampires up to their old tricks could threaten the budding romance between Karl and Faith. It’s an impossible match: a human and a vangel, but Christmas is a time for magic.