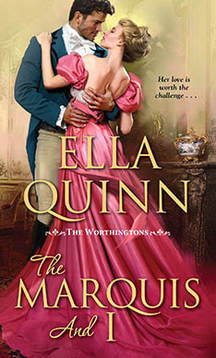 Ella Quinn is a USA Today best-selling author and fan favorite.  Known for her charming characters and spirited historical stories.  This year, the author continues her popular Worthington series in her latest installment, The Marquis and I!

But where does this talented author get the inspiration to write her engaging stories?

1)  How did you get started as a writer?

Ella Quinn: I was 58 and had really started hating my job. For some reason, I thought I'd write something. The problem was I didn't know what I wanted to write. At the time my husband and I were executing our five year plan to buy a sailboat for retirement. So I started keeping a journal, but that fizzled pretty quickly. It turns out I can't write about my world. Then I read an interview by Stephanie Laurens, and she said write what you read. Within hours, I had an angry Regency lady in my head wanting her story told. A month later I had a first draft. That was The Seduction of Lady Phoebe. Book #1 in The Marriage Game.


2) Wow, what an amazing stor.  You are such an inspiration.  Can you tell us what attracts you to romance in particular?

Ella Quinn:  The journey to a Happily Ever After. And that it's a genre that has always been mostly by women, for women. The genre is denigrated by a lot of people who have never actually read a romance. It's seen as not serious literature, but neither are books written by John LeCarre, Robert Ludlum, Tom Clancy or a host of other authors. What most of them have in common is that they are men. I've got two post graduate degrees, I've been in the Army twice, taught at two universities, and practiced law. I don't need to write serious literature, I just want to write books that make people laugh, cry, and feel good at the end. Oh, and learn a little about history while their at it.


3)  Do you have any favorite authors that have inspired your writing style?

Ella Quinn: Probably Georgette Heyer. I've been reading her since the early 1970's. She is so funny you can't help but laugh out loud. I was on a plane re-reading one of her books and I started to laugh. The man in the next seat leaned over, and began reading over my shoulder. She also has fabulous detail and characters.


4)  The Regency period is my favorite in the historical genre.  What appeals to you about that period and what do you think makes it so special to write about?

Ella Quinn: It's my favorite as well. I love the rules, the culture, and the fashion. It was a time of philosophical enlightenment. Love matches were, for the first time in (English) history, being taken seriously. Oh, and men in pantaloons. Did you know that their tailors cut them 2 inches narrower then the men's measurements?


5) I did not!  What gave you the idea for the Worthington series?  Do you have a favorite character from the series?  Or one that is most like you?  If so, who and why?

Ella Quinn: The Worthingtons is a spin-off of The Marriage Game. My ideas always start with the characters. I had a lady in her mid-twenties who'd promised her mother she'd keep all the children together. Against all odds, she managed to gain guardianship of her seven brothers and sisters. Naturally, it would be hard to find a gentleman who would want to be married to a woman with seven children ranging in age from five to eighteen.  Then I started doing a little research and discovered that during the Regency, a married lady could not have guardianship of a child. Not even her own. So, if she married, she'd automatically lose guardianship of the children. Then the question became not only who'd want her, but how could she trust a man to keep the children together.

I love all my characters, but, if pressed, I'd have to say Lady Mary Carpenter. Mary is five years old when the series starts. Here is a snippet from a scene in Three Weeks to Wed, book #1 in the series. Matt has just discovered the woman he loves, Grace, has guardianship of her siblings:
The youngest girl walked in, a mulish cast was about her mouth, and her determined chin trembled a bit. “You made Grace cry.”

That was fair. He felt like crying as well. “I didn’t mean to. I meant to make her happy.”

The child creased her brow and nodded wisely. “Made a mull of it, did you?”


6) Funny!  How many books do you plan to write in the Worthington series?  Will there ever be a holiday/Christmas romance that brings them all together?

Ella Quinn: The number of books in the series has yet to be determined. There are eleven children (Matt has four sisters). Each of them will have their own books. But I've already added two books for their friends, and two novellas. One for Patience Worthington, Matt's step-mother, and the one I'm writing now. Who knows how many other characters will appear? I certainly don't. I guess the answer is at least fifteen, probably more.

There will be. I wanted to do one for this year, but when I looked at the baby birthing schedule, I couldn't get them all together. I also have to have time to write it. Currently, I'm finishing the novella, I have one more Worthington book on my contract. Then I'm contracted to write two more books in The Marriage Game, and then I'll continue on with The Worthingtons.


7) In your forth Worthington book, The Marquis and I, is coming out this February!  The hero, Constantine is quite the rogue!  What redeeming factors does he have that melt Charlotte’s and the readers’ hearts?

Ella Quinn: He is quite the rogue! But he doesn't see himself that way. He's very much a man of the time. I think his most redeeming factor is that, even though he knows he's right, when he discovers he's not, he's willing to change. He's also willing to let Charlotte, be herself and not try to change her. I think for women of any era, that's important.


8) I really like that about a hero!  Where do you get your ideas for your heart swooning heroes?  Is Constantine based on anyone in particular?!

Ella Quinn: I honestly don't get ideas for my heroes, they just show up and introduce themselves to me. The one thing they all have in common is a deep sense of honor.

Constantine is not based on anyone at all. The only thing some of my heroes have in common with a real person is that some of them are tall, broadshoudered, with dark brown hair, just like my husband.


9)  I also noticed you have the fifth installment in the Worthington series scheduled for release soon!  How do you write so fast?  Can you tell us more about You Never Forget Your First Earl?

Ella Quinn: You Never Forget Your First Earl actually releases at the end of May. Being in the army gave me a good sense of discipline and Kensington gives me deadlines. As long as I'm not being interrupted, I can write for hours. Unfortunately, I don't write as fast as I used to before I learned to edit. That slows me down. I also have to take time from actual book writing for releases, edits, writer conferences, and reader events.


10) I wish I had your discipline.  Since you are such an international traveler, do plan to write any more romances based in foreign and exotic lands?  What new books do you have on the horizon?
Ella Quinn: Yes. The next Worthington books will be based in Europe.  I also have another Worthington book to write. That's due in June. Then two Marriage Game books. I've also agreed to join several other authors in a box-set about dukes. I have three on-going series now, The Trevors is my novella series that releases in box-sets. The Trevors is a spin-off of Miss Featherton's Christmas Prince. Readers who sign up for my newsletter are able to download the first book in the Trevors for free.


Thank you so much for giving us this rare opportunity to interview you!

Ella Quinn: Thank you so much for asking! It's been a pleasure!


Interviewed by Steph from the Bookaholics Romance Book Club


For additional information about this extraordinary author you can check Ella Quinn out at her website:
http://ellaquinnauthor.com/

Want your book autographed by her?
http://ellaquinnauthor.com/keeperkase.html

The Marquis and I book four in The Worthington series -February 27, 2018

Trouble is no match for a lady of the extended Worthington family—except when it comes in the form of a most irresistible gentleman . . .

Lady Charlotte Carpenter’s brother-in-law has put an infamous brothel owner out of business—yet it is Charlotte who suffers the consequences. Abducted by thugs and held at an inn, she is plotting her escape when she’s suddenly rescued by a dashing gentleman. Only afterward does she realize she’s seen him before—with two courtesans! Unwilling to tarry with such a man, Charlotte makes her second escape. But it is too late to repair her reputation . . .

A known gossip has spied Charlotte’s movements, and his report is speeding through the rumor mill. Soon, everyone knows that Charlotte spent the night with Constantine, Marquis of Kenilworth. And everyone agrees the only answer is marriage—including Constantine himself, his overjoyed mother—and his mistress! But Charlotte’s abductors aren’t finished with her yet. Now Constantine will do anything to protect the spirited woman he loves and win her heart . . .

Within the Worthingtons’ extended family circle, laughter and romance rule, and a young lady never settles for less than true love . . .

With her three good friends all recently married, Elizabeth Turley is ready for some husband-hunting of her own. One gentleman in particular sparks her interest. Geoffrey, Earl of Harrington is tall, handsome, and dashing. He’s also just a bit too sure of himself. But Elizabeth has observed enough about the rules of attraction to pique the earl’s attention. Yet once she has it, the discovery of a troubling secret taints her future happiness . . .

Lord Harrington must marry or lose a prestigious position in Brussels, and pretty, well-connected Elizabeth fits his needs admirably. But could it be that he has underestimated his bride? She doesn’t bat an eye in the face of the danger they encounter overseas. She’s strong-willed, intelligent, and more enticing each day—yet also more indifferent to him. Now Geoffrey faces his greatest challenge: to woo and win his own wife, or risk losing her for good . .