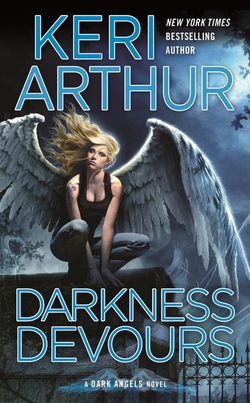 
Keri Arthur is a New York Times best selling author and the prolific writer of sexy paranormal romances and urban fantasies.  Her writing consistently breaks the mold with her stunning imagination and edgy storylines.   I first started reading her books when she published under Imajinn books and am so overjoyed she has found a wider audience.  And the success she so richly deserves!

When she agreed to be interviewed by our website and tell us about her writing secrets I couldn’t wait to find out MORE!

1) How did you get started writing?  Why do write paranormal novels in particular?  What fascinates you about them?

Keri Arthur: I grew up reading fantasy novels, but the one thing that always annoyed me was that the women in the books always needed rescuing--there was no such thing as kick-arse heroines back when I was a teenager! Anyway, I started writing fantasy novels featuring strong heroines as the lead character, but they never really worked. Fantasy world building, it seemed, was not for me. It wasn't until I read Mecedes Lackey's Children of the Night that I realized the paranormal genre even existed and, as soon as I had read it, I knew that's what I needed to write.

As to how I actually got started writing—that happened when I was around 12. I was a horse-mad teenager, and I'd been reading one of Elaine Mitchell's brumby books (for those who know of her, it wasn't the Silver Brumby series, which I adore—and highly recommend to those with horse mad teenage girls--but one of the others.) She killed off a side character I loved, and I was so mad I rewrote the entire book from that character's POV and made him live. I haven't stopped writing since.

2) We are so glad you haven’t stopped!  What do you like best about writing urban fantasy and paranormal romances?

Keri Arthur: I love the fact that paranormals are set in the real world, but feature extraordinary people and events. Plus, if I'm at all honest, they're easier to write because you haven't got a whole world to set up and explain, just the paranormal parts of it.

3) Your writing is amazing!  How do you come up with your storylines and different paranormal characters?

Keri Arthur: I have a very weird imagination! Honestly, I have no idea where the characters and events come, at least in most cases. The overall plot for the first three Riley Jenson books came from an article I read on cloning, and Mercy Burns  was born out of a 'why is it that these events always happen to men not women' thought while watching the start of The Bourne Identity. Just don't ask how I got from a amnesiac spy to an amnesiac sea dragon, because I have no idea. I told you my imagination was weird. lol.

4) I first read your books from Imajinn Pub..  I understand that they will be/have been republished under another publisher.  Will they essentially be the same books or have you 'edited' and/or expanded them?

Keri Arthur: They'll all be re-edited, and the minor plot mistakes will be fixed, but other than that, they're essentially the same. The first re-edited series to come out will be the Ripple Creek books—Beneath a Rising Moon comes out May, and Beneath a Darkening Moon comes out toward the end of the year—October, I think.

5) I can’t wait!  So….I have to ask, will you ever finish your Spook Squad books?

Keri Arthur: Sadly, probably not. There were 4 books planned, but I started writing Full Moon Rising not long after finishing the 3rd book, and that series took over my imagination. I'm afraid I'm no longer in touch with the Spook Squad world and characters, and would rather leave the series as in than try to write the 4th book and not do it justice.

6) Makes sense.  Okay, of all your books which is the most dear to your heart and why?

Keri Arthur: There's two. Dancing with the Devil, because it was the first paranormal I wrote and, even though it took ten years, the first book I had published. The second is of course Full Moon Rising, because that's the book and the series that broke me into mainstream publishing.

7) I love your Myth and Magic books, how many do you have ultimately planned? Can you tell us more about future books and the different types of dragons?

Keri Arthur: I had ideas for at least 4 books, but to be honest, I doubt they'll get written now. They didn't sell as well as the Riley Jenson books, and I'm afraid I've moved on from them.

8) That’s a shame!  But I have to admit your new Dark Angels series is super charged!  Can you tell us more about this series and how many books you have planned?  What makes Risa so special to you?

Keri Arthur: Risa is one of those characters that just appeared fully formed. I knew from the moment she appeared on the page sweet talking her aunt Riley into giving her a drink of Coke that she would have a series of her own.

There were 5 books planned, but that number has already moved out to 7—the plot is more complicated than I thought! There could be more than that—I'll just have to see how I feel about the series once I write book 7. Of course, it also depends on how, exactly, I end book 7!

9) Many of your heroines are werewolf or part-werewolf.  Are they your favorite paranormal characters?  If you could be a paranormal heroine would you be a werewolf?  Speaking of werewolves, will you expand on your Ripple Creek series?

Keri Arthur: I think I am more partial to werewolves than vampires, though I'm not sure I'd want to be one! Not that I'd want to be a vampire, either—I like sunshine too much.  :)

There was a 3rd book in the Ripple Creek series planned that would have featured Ronan, who was Savannah's second in Beneath a Darkening Moon. But again, other books got in the way and I doubt it'll ever get written now.

10) Will you ever write more Riley Jenson books or write a spin off novel?  What ideas for new books to you have planned?

Keri Arthur: There won't be any more Riley Jenson books—I've tortured that poor woman quite enough and she deserves some peace! As for spin offs, I don't know. I love the world I've set up in both the Riley Jenson and the Dark Angels books, so it's more than possible I'll set more books in it. But as yet, I have nothing planned.

As for other series—there's a couple on the back burner and both feature PI heroines. One is a phoenix who gets dragged into investigating the murder of her boss, and the other is a half elf, half siren who is asked to investigate the death of a siren by her elf uncle. The second one (tentatively titled With Friends Like These) is the one I'll be finishing, as it's actually a rewrite of a story I wrote years ago. Plus, I absolutely adore the characters I have in it. Orgres and trolls and dwarves, oh my!

Wow!  This has been such a pleasure.  Thanks so much answering all my prying questions!  J

Keri Arthur: no problems—and thanks for inviting me here!


For Additional Information about Keri Arthur you can check her out at:

Risa will go to any lengths to avenge her mother’s murder—even if it means making a pact with the most evil vampire she’s ever met. Lethal and powerful, Madeline Hunter is leader of the vampire council, and will put her resources behind finding the killer—for a price. The venerable vampire requires the assistance of Risa’s psychic powers. Quid pro quo.

Someone—or something—is targeting the elders of the local council, cursing the immortal vampires to rapidly age, sink into madness, and die. Risa must track down the vengeful being responsible. But Risa’s father, a rogue Aedh priest, also enlists her in a dangerous mission. And not even the great Madeline Hunter may be able to protect her from the shadowy forces that desire nothing less than Risa’s destruction.

Risa will go to any lengths to avenge her mother’s murder—even if it means making a pact with the most evil vampire she’s ever met. Lethal and powerful, Madeline Hunter is leader of the vampire council, and will put her resources behind finding the killer—for a price. The venerable vampire requires the assistance of Risa’s psychic powers. Quid pro quo.

Someone—or something—is targeting the elders of the local council, cursing the immortal vampires to rapidly age, sink into madness, and die. Risa must track down the vengeful being responsible. But Risa’s father, a rogue Aedh priest, also enlists her in a dangerous mission. And not even the great Madeline Hunter may be able to protect her from the shadowy forces that desire nothing less than Risa’s destruction.

Being half werewolf and half Aedh, Risa Jones can enter the twilight realms between life and death and see the reapers, supernatural beings that collect the souls of the dead. But she soon makes a terrifying discovery: Some sinister force is stealing souls, preventing the dead from ever knowing the afterlife.

Reapers escort souls—not snatch them—but Risa is still unnerved when a reaper shadows her in search of someone Risa has never met: her own father, an Aedh priest, who is rumored to be tampering with the gates of hell for a dark purpose. With the help of her “aunt”—half-werewolf, half-vampire Riley Jenson—and an Aedh named Lucian who may have lost his wings but none of his sex appeal, Risa must pursue whatever shadowy practitioner of blood magic is seizing souls, and somehow stop her father . . . before all hell breaks loose.

Mercy Reynolds is a reporter in the San Francisco Bay area, but she’s also more—and less—than human. Half woman, half air dragon, she’s a “draman”—unable to shift shape but still able to unleash fiery energy. Now something will put her powers to the test.

Mercy’s friend Rainey has enlisted her help to solve her sister’s murder. Then a horrible accident claims Rainey’s life, leaving Mercy only five days to find the killer: If Mercy fails, according to dragon law, Rainey’s soul will be doomed to roam the earth for eternity. But how can Mercy help when she herself is a target? With nowhere else to turn, she must join forces with a sexy stranger—the mysterious man they call “Muerte,” or death itself, who’s as irresistible as he is treacherous. But can even Death keep Mercy alive for long enough to find her answers?