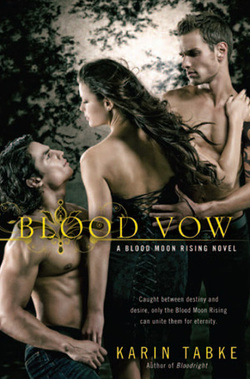 Karin Tabke is a National bestselling, award-winning author who versatility knows no bounds.  From her steamy Medievals to her hot paranormal and vivid contemporary romances her talent keeps growing and so has her fan base!

Lately this rising star has concentrated her writing on paranormal romances which are this reader’s all time favorite genre.  I was eager to ask how she comes up with her sizzling characters and complex world building.  But also to ask if she will return to her contemporary and Medieval romances anytime soon.

She was generous enough to answer my burning questions!

1)  Your writing has evolved from steamy warrior knights, hot cops and now features sexy shifters in your new Blood Moon Rising series.    Do you feel your writing style has changed?  Will you return to writing historical romances and ‘finish’ the Blood Sword Legacy?

Karin Tabke:  First I want to thank you for inviting me to hang out, Steph!  And also for all of your support throughout my career.  I truly value it.

As to your first question do I feel as if my writing style has changed? Yes and no.  No in that my voice is the same, even though it’s different for each sub-genre I write.  But yes in that I am more confident of not only myself as a writer but more importantly I have much more confidence in the characters I write.  Does that make sense?  I am getting ready to begin Thorin’s story, MASTER OF DECEPTION.  Stand by for more hunky knights!

3)  Lately, I have noticed your writing has concentrated more on your paranormal romances.  (Which, I love!)  What appeals to you about writing paranormal romances?  Is it difficult to create your own world and its own rules?  Do you have any favorite authors who have helped or encouraged you?

Karin Tabke:  I like stepping out of my ordinary world and into one I have full creative control of. I don’t find it hard to create my own world with my own rules because I don’t make it complicated.  I’m not a fan of big complicated worlds.  Keeping it simple and believable works best for me as a writer and for my characters.  I don’t read outside my genre when I’m writing it, but I do love good paranormal movies.  The Underworld series has inspired me on several occasions.

4)  I have to say I am so excited that your third book, Blood Vow is coming out this December!   Your writing only seems to get more explosive and dynamic. When I read your books I can actually ‘see’ them in my mind.   What inspired you to write this love triangle between shifters and a slayer?  How did you come up with your Blood Moon Rising world?

Karin Tabke: Thank you, Steph.  I have thoroughly enjoyed writing Rafael, Lucien and Falon’s story.  I’m a huge fan of Sons of Anarchy and as previously stated a fan of the Underworld series.  Hubby and I went to see Rise of the Lycan and as I was watching it I was thinking about Sons of Anarchy for some reason.  I had an ah-hah moment and voila, went home and hammered out a very rough Blood Moon Rising lore outline.  Btw this was a trilogy that every editor except the one who bought it passed on it.  Too dark, they said, too raunchy.  I refused to vanilla it down.  And I’m so glad I didn’t.  J

5) Your first two books in the Blood Moon Rising series seemed to concentrate more on each of the brothers in the series.  In this last book will your heroine, Falon come into her own?  Do you think you will ever revisit this world in the future or write a spin off?  Or is Blood Vow the very last of the series?

Karin Tabke: Although she has her vulnerable moments (how could she not loving two hunky alphas?) Falon owns BLOOD VOW.  My heart really went out to her as I wrote this last book in the series, and it is the last Blood Moon Rising book, that said, there is going to be a next generation series.  ^_~

6)  Speaking of paranormal romances, your L.O.S.T., paranormal suspense series is action packed and exhilarating.  I enjoyed the first book Enemy Lover, and felt that the heroine and hero deserved another book.  Will there every be another book featuring them as the main characters again?

Karin Tabke: I love love LOVE Jax and Marcus and have been giving serious consideration to giving them their own series.

7)  In fact, the L.O.S.T. series seems like it could be endless series of books but I don’t see a new ones featured as of now?  Will there be more books in the series soon?  If so, can you tell us what you have planned?

Karin Tabke:  I’m currently working on ENEMY SWORN book three in the series.  Gage’s story.  It’s going to be a bit shorter and a digital original as part of Simon and Schuster’s Pocket Star imprint.  I’m really excited about it!  And after that, there will be more L.O.S.T. stories whether they are traditionally published or self-published.

8)  Okay, if you could be a character in one of you paranormal series, who would be and why?  Is there one character that is a sentimental favorite?

Karin Tabke:  It’s a toss-up between Falon and Jax, for obvious reasons!  ^.^   Jax, Marcus, Lucien and Rafael are forever in my heart.  All four beyond tortured and beyond amazing.

9)  With all the books that came out this year how do you find the time to write?  How do you deal with writer’s block?  Or do you always have ideas ‘floating’ around in your head?

Karin Tabke:  Writing is my job and it also happens to be something I love to do.  It’s a happy chore.  I don’t get writer’s block, I get sidetracked with other things that prevent me from writing.  i.e. my family. But even with all of the distractions I always have characters swimming around in my head.  I wish I had more hands and more hours in the day to write all of their stories.  But eventually, one at a time they get told.

10)  What books do you have planned on the horizon?

Thanks so much for graciously giving us your time!

Karin Tabke:  Steph thank you so much for being patient with me, and for all of your support over the years.  It means a lot to me.  xo

For Additional Information about Karin Tabke you can check her out at:

A volatile mix of both Lycan and Slayer, half-breed Falon is Alpha female of her pack, marked by rival Alpha brothers. But when she learns that she is the daughter of the Master Slayer who murdered Lucien and Rafael’s parents, the revelation throws her relationship with both brothers into chaos. Falon begs them not to condemn her for her father’s deeds. She realizes before her Alpha mates do that they are destined to be one and pleads with them to accept the unusual triangle. Now, if Lucien and Rafael cannot overcome their pride and accept their fate, the annihilation of the Lycan race waits within the shadow of the Blood Moon...

After years of waiting, Lycan Alpha Lucien Mondragon is poised to take revenge on his brother, Rafael, by killing Rafael’s life mate, the Lycan/Slayer half-breed Falon—but he cannot complete the kill. Instead of ending her life, Lucien defiantly marks Falon as his own.

Though terrified by the savage Lucien, Falon finds herself drawn to him. Torn between the love she has for Rafael and the hunger she holds for Lucien, the will of Falon’s heart will lead her to her destined life mate–but it may also doom the brothers and the

For Detective Cash Cantrell, hunting down a University serial killer is as routine as strapping on his gun each morning. Until he comes face to face with meddlesome coed, Rebel Yell Culpepper. He doesn’t know if he should arrest her or kiss her, but one thing Cash knows for sure, Rebel is key to finding the murderer, and the killer knows it too…