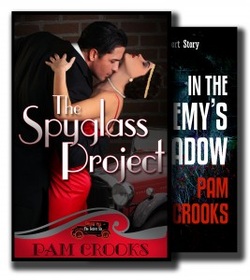 Pam Crooks grew up in the ranch country of western Nebraska.  She has written over a dozen historical westerns.  And she clearly shows her love of the untamed west in her romances!

Recently, this talented author started writing in different genres.  She wrote her first contemporary romantic suspense novel, HER MOTHER’S KILLER, and now has begun her newest series with THE SPYGLASS PROJECT set in the 1920s, Chicago's Prohibition era.  The series is called the Secret Six.  I have to admit I have always been fascinated by this time.  I was thrilled to have the opportunity to ask her about her upcoming books!

Here is what she said.

1) Why do you feel romance books are important?  Did you find it difficult to break into the publishing world?
Pam Crooks:
Romance novels definitely have a place in a woman’s life!  Their importance lies in the storyline--a man and a woman who love each other so much that the world could fall apart around them, and they wouldn’t even notice.  It’s every woman’s dream to have a man committed to her with his heart and soul, loving her so much he’d walk on hot coals in his bare feet to protect her.  It’s every man’s dream to have a woman want to cherish him and live the rest of her life with only him and no one else.  That dream becomes real in our books.
I did, indeed, find it difficult to break into the publishing world.  Everything that could go wrong for me did.  But I persevered, and I finally sold in 2000, going on to eventually write for two New York publishers.

2)  What do you think of e-books?  Do you think they are a good opportunity for new authors or established authors to expand their horizons?
Pam Crooks:
E-books have turned the publishing world upside down.  As one who is very detail oriented and a bit of a control freak, I love the experience of being the head honcho and calling all the shots.  I also love being able to check sales in real time at an assortment of publishing platforms.  Getting paid every month is just amazing.  Who knew five years ago this would be happening?
That said, the ease of self-publishing, while entailing a substantial learning curve, has opened the door to--forgive me--a lot of muck.  Amateurs hoping to get rich are publishing poor quality work.  But cream rises to the top, and many deserving authors who have been ignored by New York publishers have done exceedingly well on their own.

3)  I’ve heard that some publishers won’t print books of certain genres/time periods.  Have you had this difficulty, especially writing your ambitious Secret Six series set in the Prohibition era?
Pam Crooks:
I’ve never submitted the first book of the Secret Six series, THE SPYGLASS PROJECT, to a traditional publisher, but it wasn’t because I didn’t think the 1920s was a sellable time period.  After getting the rights back to my first four historical western romances, I’d had a sweet taste of self-publishing, so I’d always planned on publishing the Secret Six series on my own.

4) Did you always secretly want to be a flapper?  What attracted you to Chicago's 1920s?  Do you find it the perfect backdrop for suspense and seduction?!  How many books do you have planned for the Secret Six series?
Pam Crooks:
LOL. Me, a flapper?  Hardly.  I’m too much of a live-by-the-rules kind of girl.  I don’t think any of my heroines will be flappers, either, but who knows where whimsy will take me in future books?
1920s Chicago was all about gangsters, too, and since I’m Italian, they have always fascinated me.   Throw in undercover government agents like the Secret Six, give them a beautiful woman to tangle with, some period cocktails to drink, a little murder and mayhem, and hey, what’s not to love?  I have so many story ideas for my Secret Six guys, I hope to get them all written in the six-book series.

5)  You are a well established western writer.  What is it about the old west that calls to you?
Pam Crooks:
As much as I love guys in Fedoras and dark suits driving long, sleek automobiles, I love cowboys in tight jeans on a horse, too.  Cowboys lived their days working hard, revering the land and their animals.  They were unpretentious, they respected women and lived by a code of honor that is often sadly missing today.  Calloused hands, rock-hard muscles and those Stetsons riding low on their forehead . . . sigh.

6) How difficult is it to switch into different genres?  Do you think it is a different aspect of your personality when you write in a different genre?
Pam Crooks:
Yes, it’s been a bit tricky.  I’d written westerns for so long, that some of the phrasing would slip through and be a glaring step back into a different time period!  But learning to use the slang so prevalent to the 1920s has been fun, too.  Chicago was quite the city back then, and writing in the fashions, automobiles, Mafia hitmen, etc., have all added layers to the series I’ve found exhilarating.  Like I said earlier, being Italian and growing up around my immigrant family, I can really relate to some of my characters.  I think I’ve portrayed them quite accurately.

7)  Speaking of different genres, can you tell us about your romantic suspense novel, HER MOTHER’S KILLER?!
Pam Crooks:
After writing so many westerns, I was ready to try my hand at a contemporary romantic suspense, and HER MOTHER’S KILLER was born.   I’d intended it for Harlequin’s Intrigue line, and my editor at the time wanted to buy it, but alas, the book didn’t make it past Intrigue’s senior editor.  So I set it aside until the self-publishing wave hit.  It was very gratifying bringing that story to life.  I especially love the cover--it’s perfect for the mood of the book.

8)  Do you plan to write more suspense novels or are you now concentrating on your Secret Six series?
Pam Crooks:
I am totally concentrating on the Secret Six series.  I really poured my heart into THE SPYGLASS PROJECT, and right after that, I wrote a free short e-story featuring Agent Delilah (introduced in THE SPYGLASS PROJECT) called IN THE ENEMY’S SHADOW.

10)  I want to thank you for taking the time to answer all my questions! It has been a pleasure having you on our website. :)
Pam Crooks:
Oh, gosh, Steph, it was such an honor.  I’m delighted to be asked.  Thank you--and your readers--for having me!

In the Arms of a Cowboy
4 Best-Loved Historical Romances in 1 Boxed Set!

Hannah grew up on the wrong side of the law, daughter of a master thief and student to his trade. But when he dies at the hands of an angry mob, she flees to a monastery to escape the world and her sins.

Quinn is betrayed by his brother and sentenced to a life in prison. Only the thirst for revenge keeps him alive. He will do anything to escape.

Together they must run for their lives to survive their pasts. And in the journey, they find truth . . . and an unlikely love in their hearts.

All Sonnie Mancuso wants is to be needed by her father. Unfortunately, he already has a daughter--six, to be exact--and all he needs is a son.

Orphaned in the slums of New York, fifteen-year-old Lance Harmon needs a home. Sonnie’s father gives him one, on the cattle-rich Rocking M ranch. Through the years, Lance learns to love the land, the work . . . and Sonnie.

But Vince Mancuso’s health is failing, and there’s trouble on the Wyoming range. Sonnie returns home to claim the legacy that’s rightfully hers . . . but learns Lance has already claimed it.

Liza was born to roam the land with her mother’s people, but she's shamed by the sin that made her forever different.

Reese has set down roots deep in the Nebraska prairie. His dreams are sure to come true with a new railroad and a proper wife and child.

But Liza is accused unfairly by Reese’s people, and she is forced to flee the security of her world to seek safety in his. When Reese’s careful plans for success are threatened, he must fight to save all he’s worked for.

Will it cost him the love he’s found with the beautiful, black-eyed woman with red-gold hair? His Lady Gypsy?

Carleigh wants only to escape her father’s lies and find the mother she never knew. When she flees into the California wilderness, Trig is blackmailed by her unscrupulous father to chase after her.

But as a special agent for the United States government, he is drawn into an opium smuggling ring only Carleigh and her mother can help expose, and he is forced to choose between two loves–Carleigh or his country.
Will it cost him the only family he has left in the world? Or will he find new life with the beautiful woman whose very blood marked her his enemy?

The Spyglass Project (Secret Six Series, Book 1)
In this 1920s historical romantic suspense, Major Michael Malone is haunted by his brother’s murder and shocking allegiance with the German enemy during the World War. He is driven to find answers and satisfy the revenge burning inside him. Eight years later, on the night his best friend is killed, evidence suggests the two murders are connected.

Gianna Mangiameli’s comfortable world is shattered when she witnesses a double murder during a cosmetic store robbery. The Mafia hitman responsible blackmails her to keep her mouth shut. Desperate to protect her family against the gangster’s threats, she must keep her secret--and find answers of her own.

Michael and Gianna are thrown into Chicago’s criminal underworld and fight a dangerous new war on America’s soil. In their need to keep each other safe, they discover romance and learn they must be prepared to pay the ultimate price--with their lives and their love.

With only hours to go before she signs a crucial deal to secure prime wilderness for the state of Tennessee, Adrienne Morelli must return to the mountain where her mother was murdered. But powerful men oppose the deal, and the killer has never been found. Worse, ominous messages threaten her life, and she’s forced under 24-hour protection, thanks to her father who hires the best bodyguard Silverhawk Investigative Services has on the payroll.

The last woman Mick Corrigan wants to protect is Adrienne Morelli. She’s made it clear she can take care of herself--and doesn’t want him in her life. Not after the night he’d broken his Number One Rule: Never get involved with a client. Now his job is to keep her safe and out of his heart. Soon, both seem impossible as together they flee into the wilderness to escape an unseen enemy, her mother’s killer....