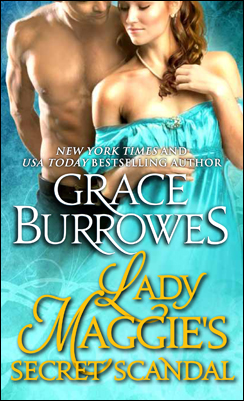 Grace Burrowes completely charmed this reader with her genuine and highly romantic Regency romances.  After reading her first book, I couldn’t believe she hadn’t been published before.  This rising star's novels are so emotional and fully developed that I wonder where she has been hiding her light!  Already one of my favorites, I was burning to ask her about her 'new' writing career and what she has planned for future books!

This is what she said.

1) What do you love most about writing romance novels?

Grace Burrowes: Tough question because my affection for this genre, both as a reader and a writer, is profound. I love the honorable struggle for a happily ever after, I love the dawning awareness on the part of both characters that life has tossed them a relationship with undreamed of potential, and I love the happily ever afters…

As a writer, what has been most surprising is the extent to which the books reflect my own character arc, the struggles and dreams punctuating my life, some of which I hadn’t articulated until I saw themes emerging in my fiction.

Grace Burrowes: I’ve been reading romance for so long that when I first came to the genre, historical romance was the only option, and Regencies were the dominant choice. So there’s a taproot for me with the Regencies, but then too, Regency society is a fascinating blend of class consciousness, individual merit, emerging technologies, and ancient institutions. They had their beautiful people and their superheroes, but got to sport about on horseback and wear cool clothes, too.

3) How do you research for your books?  Have you been to England?  If you could travel back in time would you live in Regency England?!

Grace Burrowes: You bet I’ve been to England and to Scotland, and I shall return! Poking around the original setting is great research, particularly when you stumble on places like the Twinings tea shop on the Strand, where it has been for more than 300 years. I would emphatically live in Regency England, but given that the average fellow in those days was something under five foot six (I’ve seen estimates as low as five feet), I would be a much more Junoesque specimen in that society than I am in my own.

4) What do you feel is most important in writing a romance?

Grace Burrowes: For me, it’s the character arc, the development in the hero and heroine’s self-awareness, generated by the relationship, that allows them to change enough to face down or solve the external conflict and earn the lifetime devotion of the other party. The character arc drives the plot, as far as I’m concerned, because as an author you have to choose the troubles and challenges best suited to how your characters are going to grow.

5) What do you find are the most difficult sections to write in a romance?  How do you deal with writer’s block?

Each book seems to have its own tight corners, around which I cannot see for the life of me. Focusing all the vectors—two characters, the romance, the external conflict, and perhaps a subplot or two—in the big black moment is always a challenge, too.

I’m learning patience, learning to wait for the answers to come. I pop over to another project—revisions, galleys, research—while I’m waiting. Reading anything and everything I can get my hands on in the period also helps. As for writer’s block… I try to view the no-words days as times to be building up compression for when the words come back, and that’s often an accurate assessment. On a level I can’t see, my imagination is rearranging plot elements, trying on dialogue, and otherwise getting into position to start writing again.

Writers have to do a lot more than just put words on a page, and some of what we do to create a good book has to happen when the computer is off.

6) I love the passion in your stories.  I especially enjoy how your characters always feel so real and genuine, even unassuming until this reader slowly realizes how much she/he cares for them.  How do you come up with your ideas?  Do you feel your life experiences have helped you shape your characters?  Can you tell us a little bit about your writing process when you create a new character?

Grace Burrowes: Before I started writing romance, I read romance for forty years. I also raised a wonderful child, had some terrific relationships, practiced family law for a couple decades, and otherwise lived a meaningful life. Of course my life experiences shape my characters: Westhaven, hero of “The Heir,” read law as a younger son is likely to do, but ends up as the family clerk and merchant, though he’s not at all sure that’s where he intended to end up. I know of few lawyers who don’t at some point question their career choice.

My writing process is unremarkable. I get up early, make a cup of tea, deal with my many companion animals, then turn on the computer and start writing…. That’s it. If I’m stumped, I’ll set the alarm an hour early, lay in bed for that hour thinking about what’s stumping me, and then get up and write.

If matters are desperate, I’ll plan a road trip from DC to San Diego (my folks live there), or some other far flung location, jump in the truck, and take off. Kansas, North Dakota, New Mexico, Texas, they are all designed to help an author get through difficulties with a story.

If matters are beyond desperate, I read my Work In Progress over and over until the log jam eases, and it always eases. You have to have faith in that.

7) That actually sounds a bit fun -the traveling.  After I read Lady Sophie’s Christmas Wish I realized that her brother Valentine was already married!  But his book didn’t come out until later.   What happened, did I miss something?!

Grace Burrowes: No, you didn’t miss something, I did! When I wrote Sophie, I knew Valentine would be a “fall 2012” release. Fall is Fall, and Christmas is Christmas, I thought, which is an indication of how new to publishing I am. Christmas books hit the shelves in October, and Fall can mean December or November. As the publication schedule stands, Sophie will be on the shelves a few weeks before Valentine catches up, but the books can be read in any order. Next year, I’ll know better.

8) Which of your characters who do you feel you most relate to and why?  Do you have a favorite hero?

Grace Burrowes: Probably because I’ve known him longest, the Earl of Westhaven is most familiar to me, but as I write the Windham siblings’ books, each character has moments when they want to sidle onto the page and sometimes (I hope Lord Valentine is listening) steal the scene. I’m working on the sisters’ books now, and it has surprised me how strongly I identify with each one.

Grace Burrowes: Lady Maggie is the oldest Windham sister, a by-blow adopted by the duke and duchess and raised in the ducal home. Maggie thinks herself safely on the shelf, but has to turn to investigator Benjamin Hazlit for help when even the shelf isn’t so safe anymore. She’s a woman torn between the past that haunts her and the future she deserves, and Benjamin, familiar to readers from earlier books in the series, is just the fellow to steer her in the happiest direction.

There are eight books in the Windham siblings series, also a prequel series, and many spin-offs. I’m cogitating about a Georgian story relating how Their Graces met and fell in love, too. There’s a lot more information on my website about the other books we’re planning: graceburrowes.com

10) Ohh! I can’t wait.  Their father the Duke is a real rascal!  But I have to know, do you have another Regency series planned?  Is it possible to give your fans a sneak peak?

Gracious. As noted above, there’s a prequel series, which tells the stories of Lords Heathgate, Greymoor, Fairly and Amery (whom readers know as Douglas Allen, friend to Westhaven and St. Just). The readers who’d like excerpts from these books are welcome to email me at graceburrowes@yahoo.com. I’m not sure if these prequels will come out first, or some of the spin-offs, but eventually, I’d like to make them all available to my readers.

AND, we’re launching a series of Scottish Victorians this summer.

Hmmm… sound delicious!!  I cannot tell you what a pleasure this was.  I feel so privileged to have had the opportunity to interview an author I respect so much.  Thank you for your gracious time!!

Thank you! I love to prose on about my writing, my characters, and my books, and I love as well to hear from the people reading them. Readers can find me at the website, on my various blogs, and at my email address.

Interviewed by Steph from the Bookaholics Romance Book Club'


For Additional Information about Grace Burrowes you can check her out at:

Maggie is the Duke of Moreland's eldest, but illegitimate, daughter. She Maggie Windham leads a retiring, dignified life... until stolen letters bring Maggie to investigator Benjamin Hazlit's door. When it becomes clear Maggie is being blackmailed, Benjamin becomes determined to find not just the letters, but the way to Maggie's heart.

The highly praised trilogy of Regency romances by award-winning author Grace Burrowes concludes with gifted pianist Valentine Windham, youngest son of the Duke of Moreland. Val retreats to the country after an injury robs him of his musical ability, only to learn from impoverished widow Ellen Markham that he can be loved even when his music falls silent

It's just before Christmas, and Lady Sophie Windham has an abandoned baby on her hands with nobody to help her but a handsome stranger who hates the holidays. Sophie and Lord Vim Charpentier succumb to a vulnerable moment, and he feels he must leave before he compromises her. But they're trapped by a snowstorm in a ducal mansion full of well-placed sprigs of mistletoe...

This Regency era battle of wits, wills, and the sexes features a wily duke determined to see the succession of his line secured. The duke can't force his sons to marry, but he can make their lives miserable until they do. Resisting his pressure, each gentleman holds out for true love.

The second book in the series features Devlin St. Just, the duke's oldest, but illegitimate, son. He arrives at his new estate weary in body and spirit only to find the previous owner's bastard daughter and her beautiful cousin are his responsibility and making his life almost unbearably complicated.

Gayle Windham, Earl of Westhaven, is the firstborn legitimate son of the Duke of Moreland. To escape his father's inexorable pressure to marry, Westhaven decides to spend the summer at his London townhouse, where he finds himself intrigued by the secretive ways of his beautiful housekeeper. Anna Seaton is a poised, educated, lovely woman, leaving him puzzled as to why she'd work as his housekeeper. As the two draw closer and begin to lose their hearts to each other, Anna's secrets threaten to bring the earl's orderly life crashing down--and he doesn't know how he'll protect their shared dreams from the consequences.