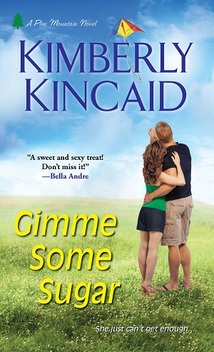 Hot, up and coming romance author, Kimberly Kincaid, is a RWA Golden Heart finalist.  She is known for her steamy contemporary novels that combine her love of romance and food.  Yum!  This year, her first full length novel, Turn Up the Heat, came out and she has more delightful books to follow.

I couldn't wait to ask her about her new books and what she has planned for the future!

1) Wow, is seems like you came on the publishing scene like a whirlwind!  Did you find it difficult to get published?  Do you have any advice for aspiring authors?

Kimberly Kincaid: It’s definitely a marathon for most writers to become published! But just like you have to train for a marathon, you have to “train” for publishing. I definitely recommend becoming part of a writers organization (for romance writers, the Romance Writers of America—or RWA—is the most amazing support and education network!), taking classes on craft, and doing your research by reading blogs and asking questions in forums really pays off.

2)  How long have you wanted to write?  Did you always want to write romance?

Kimberly Kincaid: I started writing with the intent to be published in late 2009, but I’ve always loved writing. Yes, I have always been a romance writer at heart! I love everything about it, right down to the Dark Moment (because I know it will all get happier in the end!)

3) Mmmm... Food and romance -most women's two favorite things!  Are you a culinary wizard in addition to a great writer?  Would you ever write your own cook book or open your own restaurant?

Kimberly Kincaid: I come from a big Italian gamily, and married into a big Italian family. We cook a ton, and I love being in the kitchen. I do have plans for a cookbook (but they’re on my Five Year Plan). I’ll leave running a restaurant to the pros, though—I’d be too busy eating, heh.

4) What inspired you to write your Pine Mountain Series?  How many books do have you planned?

Kimberly Kincaid: There are four books (plus The Sugar Cookie Sweetheart Swap, released in September 2013) total in the Pine Mountain series. My family vacations at Deep Creek Lake, in the Blue Ridge every year, and I have always wanted to write a series based on a town like that. The characters all sprouted from my imagination, and they’re quite insistent on who they are. I have very little control over them once they appear in my head!

5)  What makes the main characters in Gimme Some Sugar so dear to your heart?

Kimberly Kincaid: Oh, Carly and Jackson. On the surface, they seem like opposites, yet beneath it all, they have so much in common. They’re both so fabulously hard-headed, but in endearing ways. I love Carly’s fiery spirit, and I really love Jackson’s smart-aleck tendencies. They were such fun to write.

6)  You also wrote another series called the Line in 2013.  Can you tell us more about them?

Kimberly Kincaid: The Line books are separate from the Pine Mountain series, but they still showcase food as a thematic element. They feature hot cops, sexy chefs, an ER doctor and a very busy town diner as the central hub.

7) In your first book, Love On The Line, I noticed that your heroine is also a chef.  I see a recurring theme.  Will all of your books have a little 'taste' of good food in them?  Do you feel that food is an aphrodisiac?!

Kimberly Kincaid: Food is definitely one of my over-arcing themes. It plays a role in everything I write. There’s just something so evocative and wonderful about the idea of food creating intimacy. Absolutely an aphrodisiac!

8)  What do you feel most satisfying about writing?

Kimberly Kincaid: For me, I love to write no matter what, but I feel most proud when my three daughters see me living my dream. It shows them that all the hard work and dedication pay off.

9)  Can you give us a preview of your future books?!

Kimberly Kincaid: I can! There’s a third Pine Mountain book coming out in October, called Stirring Up Trouble. It’s the story of sassy, smart Sloane Russo, and her unlikeliest of matches, restaurant manager Gavin Carmichael. Then the series finale is the book I think a lot of people are waiting for. Yes, rough, gruff sous chef Adrian Holt meets his match in Fire Me Up, which will be out in February 2015.

10)  Meeting you has been a fantastic experience!  Thank you so much for honoring us with your time. :)

Kimberly Kincaid: It’s my pleasure! Thanks so much for having me. And just remember—don’t read hungry!

For Additional Information about Kimberly Kincaid check her out at:

There are only so many times a girl can hear those words before she believes that it is, in fact, very much her. Unexpectedly jilted by her locally famous boyfriend and haunted by a boss who makes Attila the Hun look like a lap dog, Bellamy Blake does what any self-respecting girl in her shoes would do. She rounds up her two best girlfriends and makes plans to get the hell out of Dodge. . .

But Bellamy's escape plan takes a nose dive on the side of rural route 164 when her transmission self-destructs, leaving her in the middle of a cell phone dead zone with nothing but her wits. Oh, and Shane Griffin, the hottest mechanic who's ever checked under her hood.

Yet this small-town man isn't all he seems. Can Shane and Bellamy prove that sometimes the most unlikely ingredients make the most deliciously sexy mix?

For friends Clara, Abby and Lily, only one thing is more delicious than the Pine Mountain holiday cookie exchange – finding the right man before they ring in the New Year!

When flames from a recipe gone disastrously wrong send hunky firefighter Will Mason to pretty Clara Parker's rescue, the sparks really begin to fly! And once Will gets a taste of Clara, he aches for more than just a little sugar from the famously single food columnist. . ..

"No fan of the genre should miss Angell's surefire romances." –Booklist

When caterer Lily Callahan goes up against hotshot pastry chef Pete Mancuso in the bake-off of the season, the stakes are high--and scandalously passionate. Will the gorgeous gourmand steal Lily's heart--and the top prize in the Christmas cookie competition?


As an Ivy League ER doctor who eats double shifts for breakfast (and lunch…and dinner), Blake Fisher has little appetite for anything other than work. Being on the staff at Brenstville Hospital means taking care of people, a need Blake understands all too well from losing his brother to cystic fibrosis eight years ago. When he’s asked to coordinate a carnival fundraiser for the cause, he jumps at the chance to help others with the disease…until it lands him side by side with the one woman he never thought he’d see again: his ex-fiancée.

Streetwise and rough around the edges, Jules Shaw is no stranger to earning a living through hard work. But when her job as the restaurant manager of Mac’s Diner puts her shoulder to really broad shoulder with Blake Fisher, she nearly balks. She’d rather dodge and deflect than admit the real reason she broke things off, but the catering contract for the carnival means big business for Mac’s, and feeding people is Jules’s lifeblood.

As Blake and Jules join reluctant forces, they quickly rediscover the spark between them. But the possibility of a future together hinges on coming clean about the past, with potentially devastating consequences. Can Blake and Jules overcome their drastically different backgrounds and learn to love again, or will they always be outside the lines?

When Detective Jason Morgan is tasked with keeping a local restaurant owner safe as part of a make-or-break case, he rises to the challenge. The job is his first priority, and he owes it to the memory of his father, a detective killed in the line of duty, to do it at any cost. But Jason never expected Serenity Gallagher to be so beautiful, so serious...or so tough to protect.

Serenity has moved from place to place at the whim of her capricious mother all her life. The last thing she wants is to leave the diner she finally calls home, even if it means being stuck with a sexy blue-eyed detective. But she’s the only witness to a horrible crime, and the man behind it wants her very, very dead. Going into protective custody means survival, no matter how much Serenity hates hiding.

As Jason and Serenity bide their time together, they are shocked to discover they have much more in common than the surface reveals. But keeping her safe is Jason’s number one priority, no matter how much he’s drawn in by the woman beneath the witness, and Serenity’s past makes it difficult to trust. As the stakes get higher and the spark burns hotter, can Jason and Serenity draw the line?

Violet Morgan puts the personal in personal chef, catering to clients who want the full cooking experience rather than a culinary drop-and-dash. But when her brother’s police detective partner is injured in the line of duty and needs help during recovery, she makes an exception. Violet lost her father to the job seven years ago, and worries for her brother’s safety every day. The last thing she wants is to get up-close with her brother’s career-cop partner…again.
For Noah Blackwell, being a detective isn’t just a lifestyle, it’s a legacy. So when he’s forced to take mandatory leave and deal with the trauma amnesia keeping him from identifying his shooter, it’s as if insult and injury have joined forces— and now he’s got to deal with an unwanted caregiver on top of it. Never mind that he and Violet shared a steamy, secret kiss last New Year’s Eve. She rejects everything related to the job, and Noah’s not about to be distracted from recovering his memory and getting back to what he does best. No matter how pretty Violet is.
Despite their differences, Violet and Noah share a surprising bond in the kitchen that grows into something neither of them expect. But as Noah heals and their feelings for each other extend from the kitchen to the bedroom, Violet knows she must make an impossible choice. She may wear her heart on her sleeve in the kitchen, but can she put love on the line?