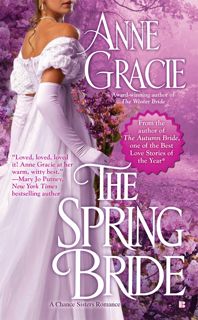 Anne Gracie is the best-selling and award-winning author of numerous Regency romances. Her books are known for their poignant and heart-warming characters. Novels that have thrilled loyal fans for years.

As one of my personal favorites, I was honored to have this esteemed author on our site. This June she will be publishing her latest Regency, The Spring Bride, which is part of her popular Chance Sisters series.

1)   I love, love your books. As an impatient reader, why do you books seem to take soooo long to come out?!

Anne Gracie: Because I'm not a fast writer. My books take time — I need to mull them over, and let the characters come to life. But I am trying to get faster.


2) I guess that is why it makes them sooo good! :)  Where did you get your love for the Regency period? Is it difficult to write a period/historical book? Does it take a lot of research and time to get all your facts correct?

Anne Gracie: I grew up reading Georgette Heyer from the age of eleven. She's the writer who invented the Regency Romance as a genre — I know some people think it's Jane Austen, but Jane was writing contemporary novels at the time. Heyer wrote historicals, and her Regencies are funny, clever and fast-paced with wonderful characters.
Because I grew up reading and re-reading Heyer's novels, the period feels very natural to me, so I don't have much trouble getting the "feel" right. Of course I have to do some research for every book, but usually that's part of the fun. Some books need more research than others.And I have to admit, though I try, I don't always get my facts correct — I've made a couple of boo-boos so far, both things I didn't research because I thought I knew the facts already. Wrong!


3)   I always feel like I am part of your books -transported back in time!  What attracts you to the Regency period in particular?

Anne Gracie: For me, that's part of the appeal of historicals — being taken off to another place and time. The Regency period offers a writer a lot of scope for all kinds of different plots. Some people think it's only about balls and going to Almacks, but there was a lot more happening during that quite short period (1811-1820) — the Napoleonic wars, for instance, the industrial revolution was really getting going, the British Empire was expanding and people were traveling all over the place. As well as London and Bath, I've set books in different parts of the UK, in Egypt, in France and Spain and on the Grand Tour (traveling through France and Italy.) Some of my characters have been at war and at sea — and not just the men. Some of my heroines have been quite adventurous.


4)  The thing that sets your books so far apart from the rest are how well-developed your characters are. I feel like they are my friends. How do you build your characters?

Anne Gracie: Thank you — that's a lovely thing to say. I don't usually pre-plan them. I can decide everything about a character, but the moment I try to write them, they'll morph into someone different — it's on the page that my characters truly come to life. For instance, Gideon in The Perfect Rake — he was supposed to be a dark and dangerous hero, but instead he walked onto the page being flippant and funny and totally charming. I wrestled with him a while, but eventually let him be who he was.
Some characters, like Gideon just walk onto the page, three dimensional and complete. Some, like Abby in Autumn Bride will take me longer to really get to know them. I ask myself questions about them all the time I'm writing — why did s/he do that? What is he thinking? That sort of thing—the questions make me dig deeper into their background and personality and motivation.


5)   I really adore that your books come in a series. I really feel I get to know the characters more with each book. How did you come up with the idea for the Chance Sisters?

Anne Gracie: That scene where Abby meets Lady beatrice for the first time came to me in a sort of dream. Often, when I'm drifting off to sleep or just waking up, a scene will come to me out of the blue — a but like a movie rolling in my head. I always write them down in a notebook I keep by the bed — sometimes there are pages and pages of dialogue. They usually become important scenes, and sometimes spark a book — in this case a series.


6)   Your dreams are a lot better than mine!  I loved the area on your website that describes how you wrote each book. Can you tell us what inspired you to write The Spring Bride, and what makes Jane Chance so special?

Anne Gracie: Thanks — I need to update that page, don't I?  So, the inspiration? A contract and a deadline? <g> No, seriously I always knew I was going to write Jane's story and I had some ideas for her, but when I started, I realized the hero I had planned for her wasn't right for her, so I had to find out who her true hero was and what her story would be with him. He's a wild card, and a mystery for a lot of the time but he brought out the best in Jane, and in the story she really grows as a person, I think. As does he.


7)   I have to ask, when will The Summer Bride romance be coming out? Will we get a peek about the storyline in The Spring Bride romance, or can you give a sneak peek now?!

Anne Gracie: I don't have a date yet for The Summer Bride — 2016 sometime. It's Daisy's story — yes, Daisy who is so certain she doesn't want to marry. She's not like the other girls, who are all, despite their pasts, ladies; she's an outspoken Cockney foundling who grew up working as a maid in a brothel. She has a bad leg, a temper, a wicked sense of humor and a dream: to become the most fashionable dress maker in the Ton — "Fashion to the toffs" as she puts it. I love her to bits. As for her hero... you'll just have to wait and see. ;)


8) Ohh! I can’t wait!  I discovered that you also co-wrote a Tudor series book as well as wrote a short contemporary cowboy romance. Do you have plans to write more book outside of the Regency genre you are so well known and loved for? Can you tell us about it/them if you are?!

Anne Gracie: The Tudor book was a novelization of The Tudors TV series. My job was to take the scripts of the first series and turn it into a novel. It was interesting, but the deadline for the second book clashed with my own novels, and writing my own novels won.
I had a lot of fun with my one contemporary romantic comedy. I would like to write more contemporary rom-coms, but at the moment I just don't have the time. If I write anything extra outside my current contracts it will be the books readers have been asking for.


9)  That makes sense.  Your books are so vivid and real. I can see them as wonderful movies. If you could pick one of your to books to be made into a movie, which one would it be and who would be your dream heroine and hero and why!?

Anne Gracie: Thank you so much. It's hard to pick one — movies need action as well as dialogue. Maybe The Perfect Rake, or perhaps Bride By Mistake. As for a hero, for Bride By Mistake, I'd pick Jensen Ackles and Zoe Saldana as Bella. Prudence and Gideon are harder to cast — he needs to be good looking but with a gift for comedy, and she needs to be sweet and a bit plump. Any suggestions?


10)  Well, I rather like Hugh Jackman...   But I digress, I know this is way into the future, but once you finish your Chase Sister series. Do you have any new ideas for future books? Can you give us a hint?!

Anne Gracie: I am currently tossing around ideas for a future series, but nothing definite yet.


I have to say, this has been such a dream come true! Thank you, thank you, for taking the time to let us interview you at our website. :)

Anne Gracie: Thanks so much for inviting me, Steph.


Interviewed by Steph from the Bookaholics Romance Book Club

For Additional Information about Anne Gracie check out her website at:

Summer Bride 2016 (Forth book in the Chance Sisters series)

Spring Bride -April 2015 (Third book in the Chance Sisters series)
A dog in need of rescue brings together a young debutante and a mysterious stranger in this regency charmer from the beloved Anne Gracie.  For fans of Mary Balogh and Madeline Hunter.
On the eve of the London Season, Jane Chance is about to make her entrance into high society. And after a childhood riddled with poverty and hardship, Jane intends to make a good, safe, sensible marriage. All goes according to plan until a dark, dangerous vagabond helps her rescue a dog.
Zachary Black is all kinds of unsuitable—a former spy, now in disguise, he’s wanted for murder. His instructions: to lie low until his name is cleared. But Zach has never followed the rules, and he wants Jane Chance for his own.
If that means blazing his way into London society, in whatever guise suits him, that’s what he’ll do. Jane knows she shouldn’t fall in love with this unreliable, if devastatingly attractive, rogue. But Zach is determined—and he‘s a man accustomed to getting what he wants.

Winter Bride -April 2014 (Second book in the Chance Sisters series)
Damaris Chance’s unhappy past has turned her off the idea of marriage forever. But her guardian, Lady Beatrice Davenham, convinces her to make her coming out anyway—and have a season of carefree, uncomplicated fun.
When Damaris finds herself trapped in a compromising situation with the handsome rake Freddy Monkton-Coombes, she has no choice but to agree to wed him—as long as it’s in name only. Her new husband seems to accept her terms, but Freddy has a plan of his own: to seduce his reluctant winter bride.
Will Damaris’s secrets destroy her chance at true happiness? Or can Freddy help her cast off the shackles of the past, and yield to delicious temptation?


Autumn Bride -Feb. 2013 (First book in the Chance Sisters series)
Governess Abigail Chantry will do anything to save her sister and two dearest friends from destitution, even if it means breaking into an empty mansion in the hope of finding something to sell. Instead of treasures, though, she finds the owner, Lady Beatrice Davenham, bedridden and neglected. Appalled, Abby rousts Lady Beatrice's predatory servants and—with Lady Beatrice's eager cooperation—the four young ladies become her “nieces,” neatly eliminating the threat of disaster for all concerned!
It's the perfect situation, until Lady Beatrice’s dashing and arrogant nephew, Max, Lord Davenham, returns from the Orient—and discovers an impostor running his household…
A romantic entanglement was never the plan for these stubborn, passionate opponents—but falling in love may be as inevitable as the falling of autumn leaves...