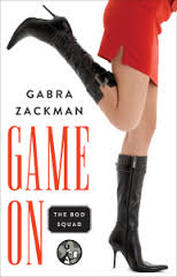 
Gabra Zackman is a woman of wild imagination and many talents.  She is a popular actor and the voice of numerous audio books.  While narrating she became inspired to write her own romance!  A spy romance trilogy with tons of adventure and humor called the Bod Squad series.  She debuted her first book Game On and already has critics raving for more.

I wanted to ask her how her life as a gifted actor influenced her writing career and what future books she has in store for us.


1)  Getting your work recognized is difficult.  As a new author, do you have any advice for writers trying to get their work published?

I was extremely blessed in having one of my best friends from childhood, the great writer Abby Sher, introduce me to her agent, Joelle Delbourgo. Joelle and I hit it off—she loved my ideas and the first few chapters of Game On—and she literally schooled me on how to write a pitch, a summary and a bio. I was so lucky that a friend opened the door for me, and that my now agent opened it further. I think this is how it works in every creative field: being unafraid to ask for help, advice or introductions is a great way to start. Also I think being willing to learn is a huge bonus…I really took all of Joelle’s advice to heart and followed it to the letter.

2)  I understand that narrating audio books inspired you to write a book of your own?!  Or did you always have a hankering to write before that?

I always had a hankering to write but since I built my career in audiobooks by narrating romance and chick lit, it did send my wheels turning in a certain direction. I’ve wanted to write fun sexy books for a long time. In truth, all of us in the audiobook community have these conversations: what would we write if we had a chance? Could we? Could we find a way to write stories that we then could all narrate? This dream has come true as Audible.com has bought my books and is allowing me to have them produced as a multicast—this means I can use all my friends in the industry to bring these stories to life.


3)  Why did you decide to write about romance in particular?

Well first off I am a huge admirer of the genre. I’ve always felt that romance is the greatest escape one could ask for, and the deepest journey. In narrating a lot of romances, I’ve come to look up to so many writers whose stories inspire me to open my heart wider, to laugh, to cry. Some of my favorites who I’ve narrated for are Kyra Davis, Maria V. Snyder and CE Murphy…all exceptional writers with imaginations that always take me on a grand adventure. They’ve inspired me to want to give the gift of great stories like they’ve given to me.

In addition, I’m a romantic at heart! This means that no matter what the story, the genre, the scenario, I always create the romance But we all know what a gift it is to be transported by a romance, to be taken in by a couple and their chemistry, to root for them to win. I think romances are the best stories on earth.


4)  Do you personally prefer audio over reading and why?  Will you offer your books in audio in the future?

I don’t prefer audio—if pushed to it, I’d say I prefer reading. But I am so enamored of the craft of audiobook narration, and the community of narrators and engineers and producers that makes it happen. I actually think the written book and the audiobook are two entirely different forms of craft: equally impressive, equally expressive and yet they manifest in the mind and soul differently. I think they are interwoven forms of telling a story and I love them both for different reasons. I’m just in the midst of starting the audiobook versions of my books for Audible.com and I’m deeply excited about the possibilities.


5)  Being an actor, I'm sure you have been exposed to a lot of 'good material' to write about both on and off the screen.  What inspired you to write the Bod Squad series?

Well first of all I needed two things, quite desperately, when I began to write the series: 1: a good laugh, and 2: a good romance (not necessarily in that order). I had just moved to Denver from New York to try to change the course of my life—I felt like I was in a rut, and needed to see life from a different perspective. I wondered if it was time for me to leave acting, and to do something radical to shift the path I was on. Interestingly, the opposite happened: I continued to get a tremendous amount of both narration and stage work all over the country, and in addition wound up writing this series. But there was a while there when I wasn’t doing anything, except searching for my own romance, and I wound up writing this series as a way to find it.


6)  Can you tell us more about your heroine, Susannah 'Legs' Carter?  What makes her so special?

Oh I just love Susannah! She’s who I wish I were! What makes her so special? Well, I wanted her to feel real. Strong, but feminine, too. Awesome and shit kicking but with a heart that is built to love. And funny. I think that’s what’s special about all of the members of the Bod Squad… they’re sexy, but funny too. And Susannah is a fierce, sexy, funny, goofy lady. She’s got a difficult past as well, having lost her father as a teenager. Mostly I think she’s looking for someone who is a challenge, who can match her, who can stand by her side, and she finds all that and more in Chas.


7)  Did you base your main characters, Susannah or Charles Oakley Palmer III  on anyone you know, a movie or a character you have played?

I based Susannah, AJ Jones and Tyka (all recurring characters) on three of my best friends! Part of it was that I was living away from most of the people I knew, and part of it was that I felt we had all earned the right to live the romances we dreamed of. So it was a gift to them in some ways, but it was more of a gift to me to have them living inside my head and my stories while I was so far away from home. Many of the other characters also have pieces of my life in them, pieces of my community, and many pieces of my own fantasies.


8)  Why did you decide to write your new series as a trilogy instead on one book?  Can you tell us a little about All In, your next book coming out in July 2015?

Initially I pitched it as a four book series because I wanted each member of the Bod Squad to have a romance, and to have that romance dictate the leads of the book. The members of the Bod Squad changed, it was bought as a three book series, and some of my ideas about it have progressed. That said, each book focuses on a different romance, though the real lead of each is the Bod Squad itself. In All In, Lisa Bee and Jackson, who have been friends and colleagues for years, wind up teamed together in what becomes a massive international hunt for a criminal mastermind. Early on Jackson reveals his feelings for her—but will she fall for him? My main interest in this romance was writing about what happens when a relationship changes from deep friendship to something more. Is that possible? How? How can the rules of a friendship change and become something deeper? And what does it look like when all those feelings are being recognized in the midst of an international game of cat and mouse?


9)  You are such a creative person, since you have now authored a book do you think you might turn your hand to writing a screen play, too?!

From your lips to God’s ears. Actually, I wrote this series with the hopes that it would turn into either a film trilogy or a TV episodic…it is written so cinematically because being an actor I tend to process stories in a visual medium. So I hope this series goes in that direction…it’s primed to do so. Regarding other projects, I have written a screenplay over the last few years with one of my best friends and we’re just about to have it ready to shop around. I always joke and say, “I’ll tell a story any way they let me” but this is really turning out to be true.


10)  I have to ask, when is your third book in the Bod Squad coming out?  Can you tell us more about Susannah's adventures and any future books you have been thinking about?!

The third book, Double Down, is coming out in November, and much like the other two books, it focuses on a particular romance but has the Bod Squad as a whole as the lead. The fun part about the trilogy is how many times a wedding gets interrupted before anyone can tie the knot…it is as though no one can get married until the case is solved and the criminal is put away for good. Coitus interruptus in the highest degree! But there is, at the end, a tying of many knots and loose ends. That said, I would love this series to go further…I see them all continuing to pursue the forces of evil with humor, ferocity and a good bit of foreplay I do have a couple of spinoff ideas about specific members of the Bod Squad, or characters that come into the story later on. I guess we’ll all have to wait and see how those develop. In terms of future ideas I’d have to run them all by my agent, Joelle, and my editors at Pocket Star, Abby Zidle and Marla Daniels—deeply admirable women all, and filled with enthusiasm and opinions! I think there’s that old joke…. You ask two editors, you get three opinions


Thank you so much for taking the time to answer my prying questions it has been a pleasure having you on our site!

Truly, Steph, the pleasure was all mine!


For additional information on Gabra Zackman check out her website at:

No bride wants to hear those words, least of all Susannah “Legs” Carter, one of the Bod Squad’s best agents. But when her colleague Jackson bursts in with news that her presumed-dead father may still be alive—and possibly a double agent—the vows are on hold and the Bod Squad hits the road.

Jackson wants to help, but he’s a little distracted by Cajun cutie Lisa Bee, his closest coworker. They’ve always been friends, but there’s nothing like a little overseas danger to set sparks flying! As the two work to track a criminal mastermind, will they swap undercover work for under-the-covers play?

From Washington, DC, to Paris, Legs is tailing Charles Oakley Palmer III, a white-collar criminal she’s determined to bring to justice. But will romance or betrayal blossom along the way? Find out in the first in a sizzling new series about a team of highly skilled investigators who go undercover to catch criminals—while juggling romance, world travel, and danger around every corner.