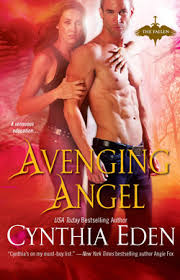 
USA Today bestselling Cynthia Eden’s spectacularly fun and steamy books make her an instant favorite.  In the past couple years she has started writing intense and spine tingling romantic thrillers in addition to her highly imaginative paranormal books.  I am a big favorite of her paranormal series and her latest, The Fallen, will be coming out its fourth installment called Avenging Angel this May!

So where does she get all her ideas?!

1)  You know I love your storytelling, especially your paranormal romances.  But recently you have really spread your wings and written a new YA novel and several suspense romances.  Was that a conscious decision on your part or have you always wanted to ‘branch’ out?

Cynthia Eden:  Thank you so much for interviewing me!! ;)  And, yes, I always knew that I wanted to branch out. I like to try new areas with my writing because I think that experimentation keeps my stories fresh. What can I say? I like challenges! Branching out helps me to keep my story ideas flowing.

2)  I am particularly interested in your Bound series about vampire and werewolves.  Why did you decide to sell them as ebooks instead of print?

Cynthia Eden:  Right now, I think it is truly a wonderful time to be a writer. With the rise of indie publishing, writers have a lot more flexibility.  I wanted to release the Bound stories on my own so that I could control the price points and the release dates for those books.

3)  That makes sense!  Speaking of ebooks can you tell us about your Loved by Gods e-book Bleed for Me?  Will this also be a series?!

Cynthia Eden:  I am such a fan of Greek gods!! I wrote Bleed For Me because I was very curious to see what would happen if a vampire happened to fall in love with the infamous sun god. I do plan to release two more Loved By Gods stories—one for Ares and one for Poseidon.

4)  That sounds sooo good!  Will your YA book also be part of a series?  Did you find writing YA books a different style?  Did you feel you had to tone things down with The Better To Bite?

Cynthia Eden: LOL, yes, I definitely had to tone things down! I found myself deleting a few scenes as I wrote. The Better To Bite was in a very different style for me since it was written in first person, and I found that I really enjoyed being able to get that deeply into the heroine’s head.  I do hope to release a follow-up book to THE BETTER TO BITE, but I don’t have a release date for that one yet (sorry!!).

5)  Okay, I am captivated by your Fallen series!  I am excited about a female angel in Avenging Angel!!

Can you tell us a little about the romance between Marna and Tanner?  Will there be more female angels?!

Cynthia Eden:  I had so much fun writing this story!! Tanner is a fierce, tough alpha—and he is completely obsessed with Marna. Everything that he does in the book is for her. I loved that about him. ;)  He might be dangerous when it comes to the rest of the world, but when it comes to his angel, he is very weak.

So far, Marna is the only female angel who has received her own story.

6)  Is Avenging Angel going to be the last in the series or will there be more?

Cynthia Eden:  It is slated to be the last book (unless something changes!). Sometimes, there are characters that I just can’t part with—and I do wind up writing extra stories.

7)  Since your paranormal books have been so popular, why did you decide to write suspense novels recently?  Was it more difficult to write the darker tone?

Cynthia Eden:  Even when I write paranormal romances, I’ve found that suspense elements tend to slip into the stories. Sneaky suspense. It’s because of those suspense elements that I decided to try writing romantic suspense stories (minus the paranormal elements). To my surprise, I discovered that I enjoyed writing the romantic suspenses just as much as I enjoyed my beloved paranormals.  It’s not necessarily more difficult to write the darker stories, but they do often require a little more research.

8)  Your talents are so diverse, is there anything else you would like to write about?  Do you think your books will always include some romance?

Cynthia Eden:  I want to write a horror novel. ;) One day, far in the future. I’d also love to write a SyFy screen play. But, of course, there would have to be *some* romance. I can’t ever let that go!! I need the romance too much!

9)  Of all your books which has been the most pleasurable to write and why? Can you tell us what new books you have planned?!

Cynthia Eden:  Oh, jeez, that is a tough question!!!  When I am writing a book, *that* particular one is my favorite, and I am totally in love with that tale. But then I start a new book, and that one becomes my favorite. It’s a vicious cycle that just goes on and on and on!

As far as new books…I will have a phoenix shifter series that launches with Kensington Brava in 2014.  Very dark and sexy!!

10)  Thank you for all your time I am so awed by your writing and can’t wait to read more!

Cynthia Eden:  Thank YOU! I really appreciate you taking the time to interview me. It has been a pleasure!!

For Additional Information about Cynthia Eden check her out at:

And check out her special contests, too!

Avenging Angel (The Fallen) by Cynthia Eden (May 28, 2013) EARTHLY DELIGHTS With a messed up family background and a tendency to grow claws and fangs, Tanner Chance isn’t exactly the boy next door. But he’s a decent cop, and he keeps himself on the side of the good guys. Convenient, because when he rescues a survivor of a horrific shifter attack he finds himself instantly smitten—with an honest-to-goodness angel, as innocent as she is irresistible. Marna may be angelic, but she’s not stupid or weak. She can take care of herself. Tanner is more temptation than protection anyway. Or so she thinks, until someone wearing her face starts taking out some of New Orleans’ more unsavory paranormals. With police and predators both gunning for her blood, Marna has no choice but to trust Tanner…even though what’s sparking between them is hotter than anything holy.     Die for Me: A Novel of the Valentine Killer by Cynthia Eden (Feb 12, 2013) She thought her fiancé was the perfect man—until he turned out to be the perfect killer… Katherine Cole is running for her life, desperate to escape the Valentine Killer—so-called because he stabs his victims through the heart and leaves them holding a telltale single red rose. Still he tracks her to New Orleans and begins carving a bloody path to her door. But this time, Katherine refuses to run any farther. This time, she’ll do anything to stop the madman she once loved, even trust the sexy cop promising to keep her safe… Detective Dane Black never lets his emotions interfere with his job, even as the Valentine Killer surfaces in New Orleans to stalk his prey. But when Dane agrees to protect the killer’s ex-fiancée, Katherine Cole, he can’t ignore the passion kindling between them. After a single unforgettable night binds them body and soul, Dane knows he won’t rest until Katherine is safe in his arms—and the Valentine Killer is dead.   Guardian Ranger (Harlequin Intrigue Series) by Cynthia Eden (Feb 5, 2013) The Last Chance bar was Veronica Lane's last hope. Desperate to find her missing brother, the sheltered computer programmer turned to Jasper Adams--the man she'd been warned to stay far away from. Veronica knew she was putting her life into the hands of the former Army Ranger, who aroused desire she had to resist at all costs. Posing as a ruthless mercenary was a cover for what Jasper was really doing: hunting a killer. And Veronica was in the line of fire. The soldier-turned-elite-ops-agent knew he was playing a dangerous game--trying to win her trust while deceiving her about his true mission. What would happen once Veronica discovered that everything about him was a lie...everything except his passion for her?   Alpha One (Harlequin Intrigue Series) by Cynthia Eden (Jan 2, 2013) "JULIE'S MISSING. YOU HAVE TO GET HER BACK." The minute he got the message, undercover agent Logan Quinn sprang into action. Getting Juliana James out of Mexico alive was the Elite Ops covert agent's only priority. But once the senator's daughter was safely back in their Mississippi hometown, Logan had a new mission: to get another chance with the woman he couldn't lose again. Juliana had never forgotten the day, ten years ago, when Logan left her heart in pieces. Now he was back in her life, sworn to protect her from the ruthless weapons dealer who wanted her dead. As passion blindsided her--and she was once again thrust into danger--Julie realized how much she'd risk for one more day in Logan's arms.   Angel In Chains (The Fallen) by Cynthia Eden (Nov 27, 2012) As a fallen Angel of Death, Azrael is cursed to walk the earth alone in search of redemption. One night, as he wanders the streets of New Orleans, he discovers a woman surrounded by panther shifters. No longer able to contain the anger simmering within, Az summons his dark powers and attacks, determined to protect this innocent human from certain death. Only Jade Pierce is no delicate flower. She's spent years learning to survive and fight the evil forces sent by her ex-lover who refuses to let her go. But after seeing Az in action, she figures she could use a little supernatural help. And so she plans a course of seduction guaranteed to arouse his interest and his angelic passions...   Angel Betrayed (Fallen) by Cynthia Eden (Jun 26, 2012) When Angel of Death Sammael (Sam) killed a dozen men - men not marked for death - he was tossed from heaven. In the mortal world, he plots his revenge, invincible and lethal. And then he meets her. Seline O'Shaw has taken a job at Sunrise, Sam's club, in order to attract his attention. Seline is an assassin, but she doesn't use physical weapons to attack her prey. As the daughter of an angel and an incubus, she uses seduction as her weapon of choice. Seline can kill with a kiss - and she has. But Sam isn't an easy mark. And when it comes to seduction, he's ready and waiting to turn the tables - with mind-blowing results...