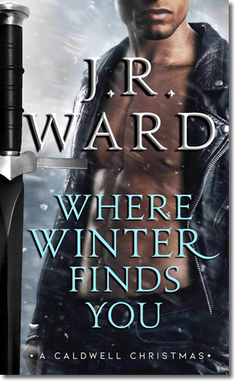 This special Christmas romance set in the Brotherhood world is pure magic!

Trez's history has been a rough.  But when he suddenly seems to find happiness with his destined mate, tragedy strikes.  Selena is taken from him by a rare disease.  Alone, he contemplates death.  However, his brother has hired a new waitress named Therese.  Trez is struck by how closely Therese physically resembles Selena.  Drawn to her, he wonders if he has a second chance.  Trez pursues her but soon comes to realize she is different.  Therese is her own person.  Unlike Selena, she is not a sheltered vampire.    She is an independent woman with her own desires.   But Trez can't help the deep attraction to Therese despite knowing this.   His heart feels that there is something between them.  But what will Therese do when she discovers Trez is using her as a substitute?   Is this really a second chance at love or a just another disaster for Trez?

Trez has been featured as a strong secondary character who must watch his love die in a terrible, debilitating way.  Heartbreaking, I cried buckets of tears for him and Selena.  When I discovered Where Winter Finds You, was about him, I had to get it.  However, I wasn't sure how Trez could possibly find love again!  The attraction between Trez and Therese is intense and they seem meant to be together.  But how does his history with Selena fit in?  I loved their scenes together and how Therese transforms and matures.  Everything thing about this novel is fantastic and while not as in depth as her usually novels, fans will definitively enjoy it.  My only quibble was that the ending or explanation of their romance seemed a bit forced.   I'm used to J.R. Ward creating super complex and angst-y novels.  This book seemed more of an appetizer, although a very tasty one!  This book is shorter, which is why I believe it is being sold as a paperback unlike the usual hardcover.

C.M. Waggoner is an utterly unique voice.   In Unnatural Magic she has created a shining new light in the fantasy genre.

Onna is a female blessed with a genuine aptitude for wizardry but her sex prevents her advancement despite her many skills.  When she is denied entrance to a nearby, premier magic school, she does not get discouraged.  Onna instead decides to travel to the sorcery filled city of Hexos where she hopes to learn magic.   By happenstance she soon finds herself embroiled in solving a series of troll murders and meeting new friends.

Tsira is a misfit.  Half human and half troll.  She has never really fit in.  Tsira decides to find her own place and moves away intent on making money and a name for herself.  One day she finds a nearly dead human man and rescues him.  To their surprise they become great friends.  But when a troll is killed Tsira is bent on vengeance.   Tsira finds herself following clues to the city of Hexos and the unlikely help of wizards.

This novel is completely captivating.  It has some surprisingly dark moments but also light and funny sections, too.   Onna and Tsira are very realistic characters.  They are very different from the stock characters we usually read about in the fantasy genre.  I found myself seeing through their eyes and becoming fascinated with the world they live in.  The author has created trolls which are only vaguely based on what most readers would expect.  Their intelligence, society and life-style are very original and absorbing.   The more I learned about trolls.  The more I wanted to know.  I feel humans could take tips from them!

The novel starts out slow but in a good way.  As it describes the world and the challenges each main character faces within their small world.  Both main characters push the norms of their society and widen their horizons.  The magic was also interesting as it was slightly different view from the usual wizardly.  I enjoyed the author’s take on trolls and magic and how she bent traditional writing on them and gave them her own twist.
Highly entertaining and completely captivating.  I enjoyed this imaginative new world and look forward to more novels featuring trolls.  (I hope!)

This spectacular dragon saga by E.E. Knight is a thrilling read for adults as well as young adults.  It follows the epic journey of an orphan with no status named Ileth.  Poor Ileth has no money and no friends.  But on one magical day she meets a friendly female dragoneer and her dragon.  During this brief encounter Ileth was overwhelmed by their kindness.  Ileth is filled with dreams of dragons.  For the dragoneer invited Ileth to come to her fortress called the Serpentine when Ileth grows old enough to apply there.

Years pass and Ileth finally makes the long trek to the Serpentine only to discover she is late and their doors have been barred against her.  But Ileth is determined and despite being told to leave she stays at their front gates hoping to be let in.  There she struggles without food in the rain and cold for days.  But her perseverance wins through as she is finally allowed entry and a chance to become a novice at the Serpentine.   But Ileth’s low status and lack of skill puts her at a huge disadvantage.  And the dragoneer who invited her has died.  Without a mentor or a wealthy background can she still graduate and become an apprentice dragoneer?

What struck me immediately after finishing this book is how emotional and intricate it was.  There were many hateful villains and some kind friends.  But Ileth’s noble heart and perseverance made her a heroine to remember.  Her triumphs against seemingly impossible odds plus her pluck and ingenuity made this book a clear winner.

This novel was a fantastic look into the dragon world.  I was just as mesmerized as Ileth when she met her first dragon!  The dragons are extremely intelligent and I actually wanted more interactions with them than Ileth’s interaction with other human characters!  Ileth has a kind heart and a stubborn will.   Readers can’t help but root for her.  I liked that although Ileth is poor she doesn’t see herself that way.  I’m happy that this book appears to be the first in a series of a least three books.  (Novice, apprentice and dragoneer.) My favorite character besides Ileth was Lodger.  A dragon which I wish I knew more about.   I can’t wait for the next book in this series!